Eurofighter Typhoon May Make an Appearance in the Baltics: Eurofighter Typhoons from Britain may be deployed to Eastern Europe. In a bold message, British Prime Minister Boris Johnson wrote on January 7 to the Times that he may decide to send Royal Air Force Typhoons to bolster NATO forces in Latvia and Estonia as the Baltic nations have asked for military help from NATO members.

The Russians Are Flying Close to Britain

This month’s quick-reaction Typhoons from RAF Brize Norton had to scramble and intercept two Russian bombers operating near Britain air space. The Typhoons escorted two Russian Tu-95 Bear Fs out of the sensitive area of operations. This was the third incident involving stray Russian bombers in February. At the beginning of the month, Typhoons flying out of RAF Lossiemouth in Moray, Scotland intercepted four Bear bombers. These events are likely to happen more as Johnson makes more military moves to prop up NATO while the West is confronting Russian aggression against Ukraine.

British Typhoons Have Been a Potent Workhorse Over Syria

The Eurofighter Typhoon is already showing its mettle in combat. In December, a British Typhoon entered its first in-air military engagement by shooting down an ISIS drone flying above Syria. Two Typhoons were patrolling near At Tanf coalition airbase when they spotted the unmanned craft on radar. One fighter launched an AIM-132 Advanced Short-Range Air-to-Air Missile (ASRAAM) and it destroyed the target. This was the first kill by a British warplane since the Falkland Islands war.

British Typhoons are flying out of the Royal Air Force base in Akrotiri in Cyprus and are participating in thousands of missions over Syria with GR1 Tornadoes.

The Typhoon was developed by a multinational coalition in Europe that included Italy, France, Germany, the United Kingdom, and Spain. France later removed itself from the group over quarrels about the fighter’s design.

In service with the British since 2003, the Typhoon is fast, highly-maneuverable, and agile with its delta-shaped design and forward canards.

The fourth-generation fighter has modern fly-by-wire controls. While not fully stealthy as the canards and outward weapons allow for radar detection, the airplane has stealth characteristics with its advanced light-weight composite materials that allow for high speeds.

The fighter can carry “six bombs while also carrying six missiles, a cannon, and a targeting pod,” according to its official website. Short and medium-range missiles (ASRAAMS and AMRAAMS) plus Paveway bombs can be employed. 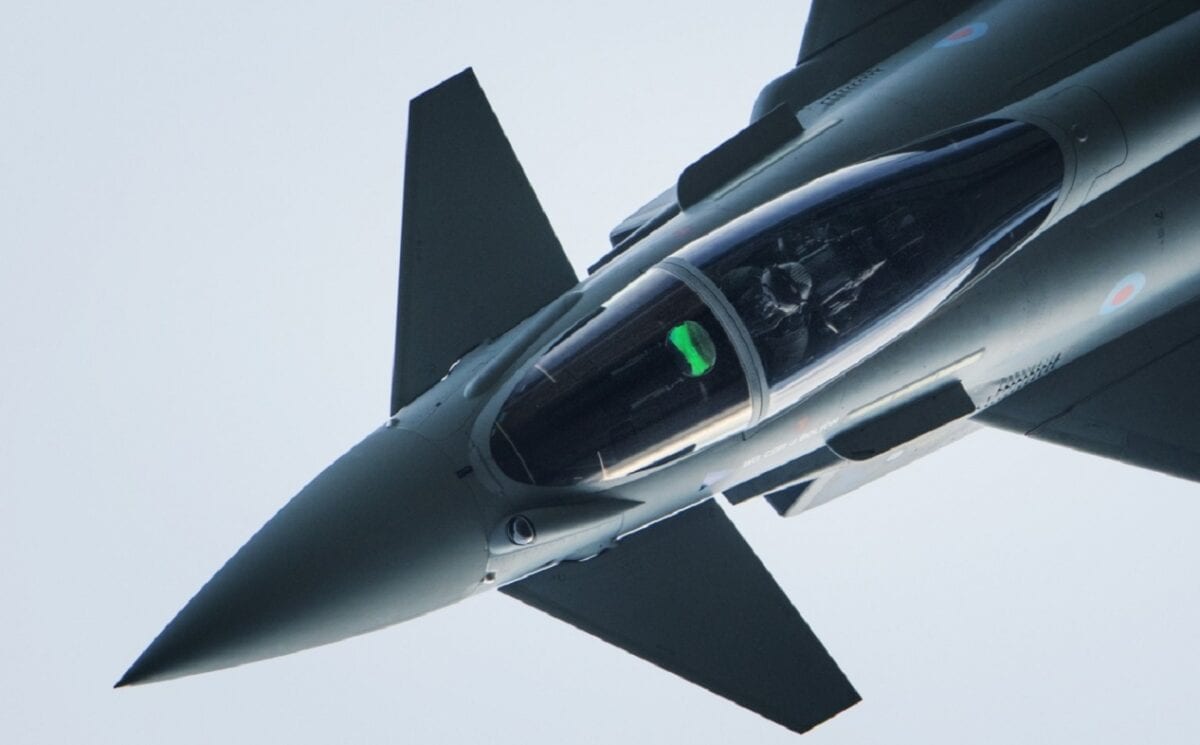 The avionics are considered superior. The smoothly-controlled airplane has been upgraded over the years with improved electronics, radar, and survivability systems.

What Is in the Mind of the Prime Minister?

It remains to be seen just how serious Johnson is with Typhoon deployment. He could just be speaking about the potential use of the fighter as the prime minister prefers diplomacy over military force. If Typhoons are sent to the Baltics, look for the Russians to fly more bombers and even fighters near the British isles and the Typhoon will have to police the skies over the homeland. These missions should be second-nature to Typhoon pilots. The Typhoon is a capable interceptor and will continue to serve the Brits into the 2030s.