The TEDBF (Twin Engine Deck Based Fighter) project is a twin-engine, carrier-based multi-role fighter with a delta wing and PGO (duck scheme), which is currently being developed for the Indian Navy.

The aircraft is designed by the Aviation Development Agency (ADA) and will be manufactured by Hindustan Aeronautics Limited (HAL). It is designed to perform a variety of tasks: air superiority, theater isolation, anti-ship operations and electronic warfare. The TEDBF is expected to replace the MiG-29K in service with the Indian Navy aboard INS Vikramaditya and the future INS Vikrant …

The program was officially announced in 2020 in response to the Indian Navy’s dissatisfaction with the operation of the single-engine carrier-based variant of the Tejas fighter and the possible collapse of the naval LCA program. The aircraft model was presented at Aero India 2021. The first flight is expected in 2026, and commissioning by 2032. The two engines will provide better takeoff characteristics from aircraft carriers of the Indian Navy, as well as increased maneuverability, increased flight range, increased combat load, as well as a survival advantage if one of the engines is damaged in battle. As a dedicated carrier-based fighter, it will have folding wings for storage in the aircraft carrier’s hangar. The aircraft will be equipped with weapons of predominantly national production.

In April 2020, DRDO-ADA announced that they are working on a new carrier-based fighter in accordance with the Indian Navy’s MRCBF requirements issued in 2016 to replace the existing fleet of MiG-29K carrier-based fighters. During the development, the experience gained in the Naval-LCA program was used. The Indian government approved the project in summer 2020. According to the first calculations, the total cost of designing and developing flying prototypes should be about $ 1,750,000,000.

The aircraft will have a PGO that creates additional lift, will be equipped with two General Electric F414 engines, a phased array radar and will be able to carry a maximum combat load of about 8 tons at thirteen external hardpoints (including two on the wingtips for air-to-air missiles. range).

The proposed version of this aircraft for the Air Force is called the Omni-Role Combat Aircraft (ORCA) and is under study. The Indian Air Force will need more than 750 aircraft between 2030 and 2050. ORCA is being developed to complement the HAL AMCA program. The vehicle will weigh about a ton and a half less than the deck version due to the lightweight chassis design.

The estimated cost of the carrier-based aircraft is $ 72.5 million, the land version – $ 66 million. 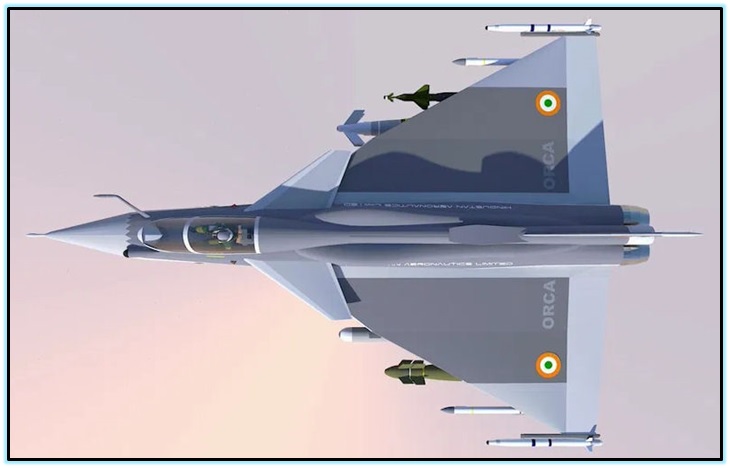