The J-20 is quick to service with a poor-quality engine and poor quality design. Generally, it’s a mix COPY of US F-22 and Russian MiG 1.44 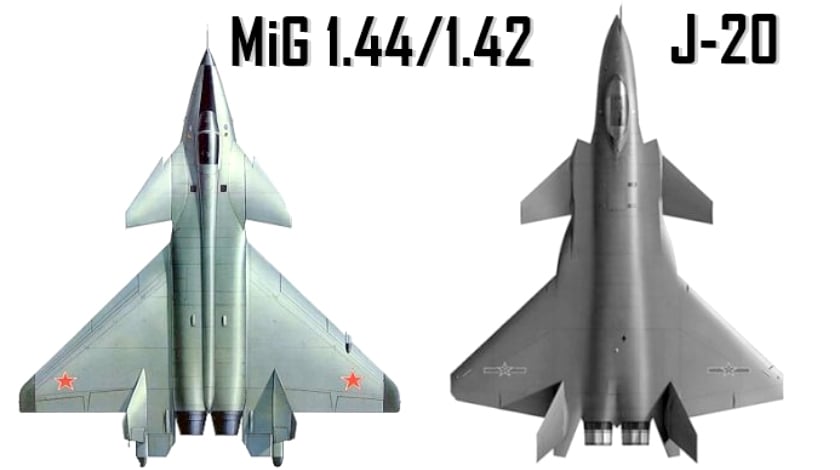 China’s first stealth-performance J-20 fighter aircraft went into service immediately after it was developed. The performance of the U.S. F-35 fighter is much stronger than the J-20, and there is a huge gap between the J-20 and the F-22, even J-20 was not ready to put it into service, but due to pressure from the US and compete with US china induct J-20 in so much hurry. The speed of service is unprecedented.The main reason China induct J-20 because they really need a fifth-gen fighter aircraft in their inventory.

Today’s number of J-20s is estimated to be only about 10, plus models developed at the time of the J-20, all of which may add up to a maximum of 30.

There are no others in the J-20 class at all. This fighter with its humoungous internal fuel capacity of 25000 lbs is designed for one single purpose only. It is multi-role in name only.

It’s main mission is to evade American and NATO aerial command radars/planes, AWACS/AWECS and other aerial assets, as well as surface assets like the combined might of Aegis combat system from multiple destroyers(Arleigh Burke class), cruisers (Ticonderoga class) with its minimized RCS, primarily from the frontal aspect and destroy the aerial fuel tanks flying far away from Mainland China based weapon systems.

The J-20 doesn’t have an all face stealth feature as the F-22 Raptor, and it needs to hide its engine area.

The F-22 has stealthy features in-built in the engines (radar wise, not heat wise – although there is a high possibility that heat distribution in the engines is the very best of any aircraft). It’s engines are hidden comfortably by the control surfaces and the exhaust nozzles not being circular help a lot too.

You can make a canard plane extremely stealthy, like the McDonnell Douglas X-36, but a similarly sized plane without the canards is going to be more stealthy than the canarded plane. Also, on the J-20 the wingloading is lesser, because canards also generate some lift in flight. And the J-20 needs canards because its engines suck as compared the the F119 and F135.

The J-20 is the perfect plane for its mission, which is to force US and allies to dedicate fighter for protection for aerial refueling assets, and thus the actual fight has lesser planes on the American side. Or if the war planners are monumental idiots, and they didn’t assign protection, to blow up those fuel assets out of the sky, and starve the F-35 and F-22 jets of fuel. This has also put the air-fight on a somewhat equal footing (The American side still has the massive advantage of 100+ F-22s and some F-35s available.)

But this plane has actually decreased the risk of an armed confrontation until F-35 is fielded in some respectable numbers by the USN, and Japanese and South Korean navies.

The J-20 engines are underpowered to enter a dogfight with the F-22 which is the only fully operational fifth generation all weather stealth air superiority and supremacy fighter. The F-119 on the F-22 are amazing. They generate 35000 lbs of thrust with fewer moving parts than the engines of F-16 and F-15. This makes maintenance easier to be done on the plane, which is notorious for being high maintenance.

They produce about 31000 lbs, and are notoriously fuel hungry. The F119 while being stealthy, more powerful is more efficient. It can go further on lesser. The WS-10 does lesser on more. The J-20 with its lesser thrust of about 8000 lbs lacks maneuverability that the 70000 lbs on F-22 provide. The F-22 has a higher wing loading of 380kg/sqm, while the J-20 has a wing loading of 340kg/sqm. And yet the F-22 is more maneuverable than the J-20, primarily because that 8000 lbs of thrust differential makes a difference.

Of course, countries such as Russia and the United States can create 5 generation fighters (SU-57, F-22 and F-35), since they have a complete cycle in the creation of aircraft. And suddenly, China became the 3rd country with a 5th generation fighter: in 2016, a pair of low-visibility fighter J-20s were presented at the air show. Anyone who is more or less knowledgeable in aviation will immediately have doubts: like China, which fighter aircraft generates 4 generations (J-11 is a copy of SU-27SK, J-13 is a copy of SU-30MK, J-15 is a copy SU-33), and here once and immediately created an inconspicuous fighter of the 5th generation J-20. Where did the J-20 come from?

According to The National Interest publication, the J-20 is a kind of symbiosis from Russian and American developments: the glider from the experimental MIG-1.44 (aircraft according to the Utka scheme + Russian AL-31FN engines), the nose and the torch are identical to the same elements on the F-22, the air intakes, and the vertical tail is very similar to the F-35 elements. Well, the fact that drawings and developments according to MIG-1.42 (the first version of MIG-1.44) were sold to China in 1990, no one doubts. But where did the Chinese get the data for F-35 and F-22? E. Snowden helped us figure this out: in the documents declassified by him, it is written that Chinese hackers have repeatedly stolen “Lockheed Martin” technical data on the F-35 . But did the Chinese hurry, calling the J-20 a low-visibility fighter? It seems that the Chinese hurried. And this is confirmed by our Indian military pilots: during training flights on the Russian SU-30MKI (still equipped with the Zhuk-AE radar), the Chinese J-20 was repeatedly spotted on the screens of its radars.