Chinese border guards were the first to receive new exoskeletons. Units guarding the border in the country’s mountainous regions have received kits from Chongqing Niudi Technology Development, CCTV reported. Thus, the soldiers of the People’s Liberation Army of China became the first to try on fantastic technology in the fields.

Specialists developed the Chinese exoskeleton from the PLA National Defense University in cooperation with Chongqing Niudi Technology Development. The kit is a set of hinges that follow the joints of the legs. Articulated with them is a satchel stand that distributes the load outside the human musculoskeletal system.

The Chinese exoskeleton’s carrying capacity is 70 kilograms – while the development is passive – there are no electric or hydraulic drives in its design. Probably, the Chinese exoskeleton uses the principle of energy storage and release through balanced lever-hinge joints.

Exoskeleton tests showed a 91% decrease in the load on a person in static positions and up to 44% in motion. At the same time, the load on the back decreased by a third.

The first exoskeleton was created in the 1960s by General Electrics in collaboration with the US military. However, the design was not used due to the high mass of the kit and technological imperfections. Nevertheless, since then, the US Armed Forces have not abandoned their attempts to obtain serial exoskeletons.

In 2011, the Defense Advanced Research Projects Agency (DARPA) initiated the Warrior Web project, which began designing the TALOS exoskeleton (Tactical Assault Light Operator Suit). The development was supposed to accommodate a set of sensors to control a soldier’s movement, a heating layer, and active hinges to facilitate movement and fixation in a certain position. The desire to get the “Swiss knife” probably turned out to be impracticable, and in 2019 the development of TALOS was suspended, giving preference to individual systems.

For example, Lockheed Martin introduced the ONYX exoskeleton, a servo system that reduces the legs’ load. The 6.4 kg kit is an active system, so the battery life is limited by the battery capacity. For example, the most capacious battery will provide up to 16 hours of assistance, but its weight is 5.4 kg – with the ONYX carrying capacity of 45 kg.

The system is equipped with a set of sensors and an AI-based on-board computer that “predicts” movements and adjusts assistance forces. The manufacturer claims the ONYX promotes an even load distribution, reducing the likelihood of injury and increasing efficiency when using heavy weapons.

Another promising development is the “third hand” from the US Army Research Laboratory (ARL). The device weighing up to 1.8 kg is mounted on the torso side and allows you to stabilize weapons weighing up to 12 kg, increasing shooting accuracy and reducing fatigue.

Speaking of walking aid, the most compact American development is the Dephy ExoBoot. In this system, the exoskeleton’s support is limited to the ankle joint – by reducing the load on the calf muscles. The system consists of a special boot with an integrated lever and an electric motor that is controlled by an algorithm. The AI ​​analyzes a person’s steps, determining the required force, after which the motor will generate additional torque in the ankle. On a single charge, the 1.6 kg ExoBoot can travel up to 9.6 km, and the reduction in leg load will be equivalent to 23 kg.

Russian developers are going through the creation of passive exoskeletons. For example, the BEC-01-PE6 exoskeleton from the Rostec-Trusted Platforms Robotic Complexes company is designed to reduce the musculoskeletal system load. At the same time, as in the Chinese system, the BEC-01 does not use additional mechanisms – the movements are facilitated by the lever-hinge elements that repeat the joints of the legs. This summer, footage from exoskeleton tests was demonstrated – according to the manufacturer, the BEC-01 allows you to carry up to 60 kg of loads, and the ability to lock the hinges contributes to accurate shooting and reducing fatigue under static loads. 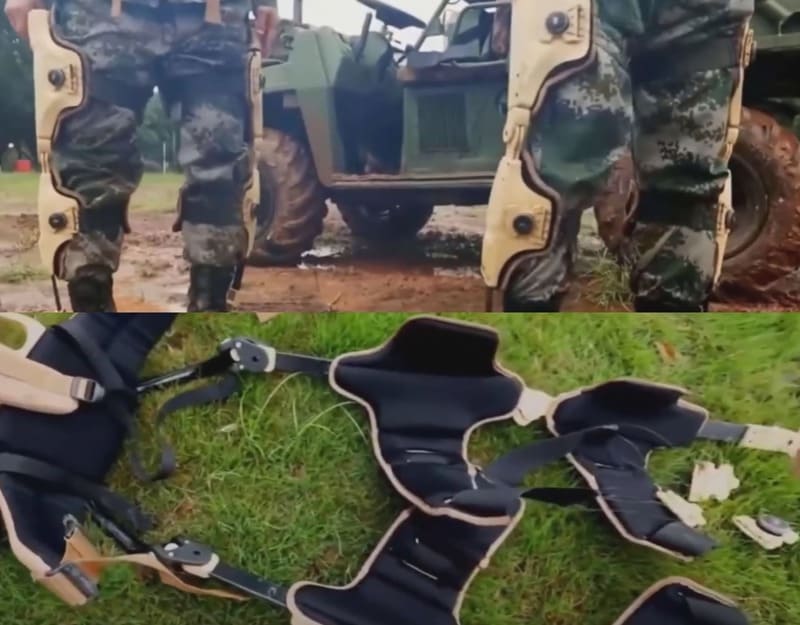 India’s Defence Research and Development Organisation (DRDO)’s Defence Bioengineering and Electro-medical Laboratory (DEBEL) has been for some time collating data for Simulation and Analysis of Musco-skeletal parts, like lower limb stimulation (while the soldier is standing), etc. The private sector companies too, are doing R&D for the Exo-suit design for the Indian soldier, which will be customised according to the different environmental challenges.

According to experts, India is already incurring expenditure on upgrading wearable gear on each soldier to meet the ever-changing combat environment challenges, but there is a limitation up to which equipment can be fitted onto a soldier’s body.

Exoskeletons are gadgets worn as a harness by a soldier to augment his strength. These body gadgets are fitted with powered special devices and Artificial Intelligence (AI) to enhance a soldier’s capability. A soldier rigged with an exoskeleton, also called Exo-suit, is capable of faster movements and possesses the extra load-bearing capability.

Since the Exo-suit technology is still evolving world over and prototype tests are underway, Make in India may be the only way ahead since such niche’ technologies may not be readily shared by an advance nation any time soon.

Biden will ask Congress to approve the sale of F-16s to Turkey.

The United States has provided Additional assistance in the form of security funding of over $3 billion for Ukraine.