Share
A dry dock being built at China’s naval complex on the island province of Hainan in the South China Sea will be big enough to accommodate the country’s new generation of aircraft carriers, military analysts say.
Satellite images found this month via the Earth Explorer website show the facility under construction at the Yulin Naval Base in Sanya, where China’s first domestically developed aircraft carrier, the  Shandong, was commissioned in December last year.

The dock is located about 2.5km (1.5 miles) from a pier where a Type 075 amphibious assault ship and several smaller warships were seen berthing recently. 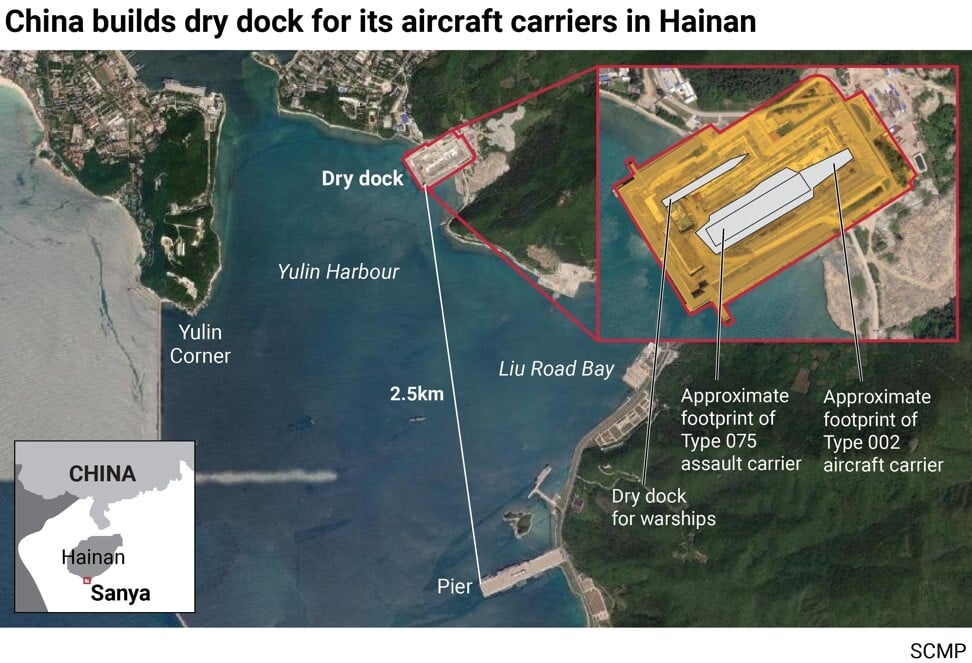 Two military sources said the dock was being built to serve the new Type 002 aircraft carriers.

“In the future, it’s very likely at least one of the Type 002 carriers will be based in the South China Sea, which has strategic importance to China,” a source close to the PLA Navy said on condition of anonymity due to the sensitivity of the issue.
“All aircraft carriers need to spend more than half the year undergoing maintenance, so it’s necessary to build a dry dock before the launch of the new aircraft carrier,” the person said.

Lu Li-shih, a former instructor at Taiwan’s Naval Academy in Kaohsiung, said the size of the dry dock suggested it would be able to accommodate warships even bigger than the 70,000-tonne Shandong.

“The dock is big enough for vessels up to 75 metres wide and 420 metres long, which is about the size of the Type 002, based on figures provided earlier by the [US think tank] the Centre for Strategic and International Studies (CSIS),” he said.
Final assembly of the Type 002 aircraft carrier – the country’s third and second to be domestically developed – began in the summer, the CSIS said earlier.
Based on satellite images, the think tank estimated the displacement of the Type 002 at between 80,000 and 85,000 tonnes.

Despite the size of the new dry dock, Beijing-based naval expert Li Jie said it would not be able to handle all of the carriers’ maintenance needs.

“For more complicated repairs and comprehensive check-ups, giant ships have to go back to the shipyards in which they were built,” he said.

A second naval source said in an interview that the Type 002 carrier
was expected to launch as early as the first half of next year.

While conventionally powered, it will be fitted with electromagnetic catapults for launching aircraft, which are currently used only on America’s most advanced – Ford class – of carriers.

China plans to build two Type 002 carriers, but work on the second, which was supposed to start in 2018, has been delayed due to technical reasons, insiders said earlier.