Stealth destroyer USS Zumwalt is designed with a strange shape to maximize stealth as well as surfing, this is a warship that is said to open up a revolution in the field of naval warfare.

The Stealth destroyer USS Zumwalt is the most expensive and modern surface warship of the US Navy, this is also a weapon line that is receiving special attention from opponents.

The blurred photo of the mysterious ship in China posted by a famous Sina Weibo account in the field of weapons has created a stir among military enthusiasts, because of the similarity between this ship and the USS Zumwalt. 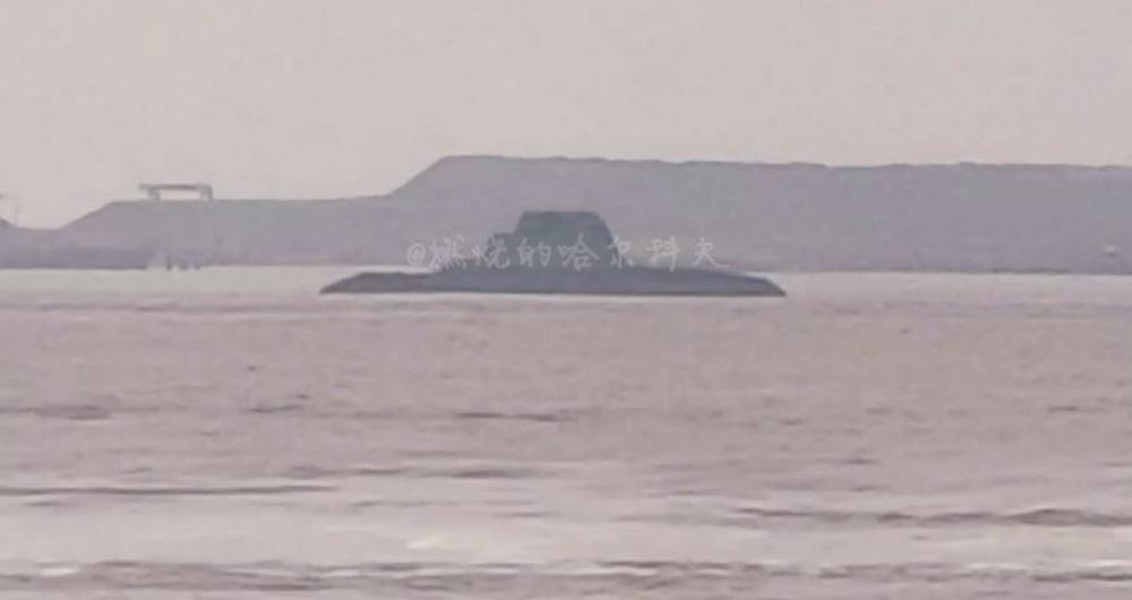 The Chinese ship seems to have a sloping roof design, with a floating upper compartment as a command center as well as a super-weird bow like that of the USS Zumwalt.

HI Sutton, an expert at the Naval site, said that the photo of the mysterious warship in the air is not a fake. He said that this ship is a small type, about the size of the self-propelled Sea Hunter of the US Navy. Because, if the ship built by China is larger, it will be detected by satellites or those who specialize in monitoring shipyards.

The owner of the Weibo account that shared the image of the strange ship also noted that it had similarities with a ship that appeared on the advertisement of Jiangnan Shipyard. It is the production base for the majority of the People’s Liberation Army (PLA) surface ship fleet, which is headquartered in Shanghai.

Recently, the Rubin Central Marine Engineering Design Bureau in the city of St.Petersburg, Russia released a graphic of the Strazh weapon, which is a combination of the features of a surface ship and a submarine. This unique combat vehicle also has the same bow as the US Zumwalt-class destroyer.

In the field of shipbuilding, the inverted-bow design maximizes the ship’s draft, increasing speed and traction. The most prominent for this type of reverse bow is the US Zumwalt-class destroyer.

USS Zumwalt is the largest battleship model to apply a small beveled hull design, in which the upper part of the water line narrows, instead of expanding like previous warships. This design greatly reduces the radar reflection area and creates better balance for small ships, but many critics are skeptical of its effectiveness when applied to large and expensive warships like the USS Zumwalt

The concern is even greater when some compare it to the F-35 stealth fighter, the most expensive aircraft in US military history, but unable to operate in stormy lighting weather due to its lack of resistance. However, the sea trials of the USS Zumwalt disproved those doubts.

“I’d rather be on this ship than on previous battleships. You need to get used to a much smaller shake than other ships. For those who have served on cruisers, especially in the hold. When you’re in command of the superstructure, you’re going to have to lean 15 degrees in the big waves and wonder if the ship will capsize. We didn’t have that situation, USS Zumwalt operated very well,” said Colonel Andrew Carlson, captain of the USS. Zumwalt, said.

The CPS program, initiated by President George W. Bush, aimed to develop ballistic missiles with conventional warheads that have the same range and speed as ICBM. The CPS has a greater range than most other conventional weapons and is capable of hitting any target worldwide in minutes to an hour.

CPS weapons allow the US to quickly attack enemy targets from a safe distance in a short time, without having to wait for deployment or bring important weapons into the enemy’s range. In the event of a conflict, CPS becomes a pre-emptive strike that destroys important enemy targets.

“The USS Zumwalt destroyer, which has a low radar cross section, is designed to operate secretly and attack opponents. However, CPS weapons are currently only a considered option for the future and not a official plan” said Colonel Smith.

“CPS could upset stability, increasing the risk of a nuclear response to a US attack. Despite concerns raised, weapons developers say they can distinguish CPS from nuclear weapons. CPS is not a substitute for nuclear weapons but is an alternative to the United States’ conventional strike capability,” a 2019 report by the US congress said.

USS Zumwalt is the largest destroyer, equipped with the most powerful weapons systems that the US Navy has ever built with the purpose of helping the US overcome Russia and China, dominate the ocean. Each ship costs more than 4 billion USD, forcing the US Congress to reduce the order quantity from 32 ships to only 3 ships.

Right from the time of laying the design foundation until going into official operation in the US Navy, Zumwalt-class destroyers are considered the most powerful non-nuclear weapons arsenal at sea today. With 80 missiles on duty, they are the most active missile destroyers in the world.

The stealth destroyer USS Zumwalt is also the world’s first warship equipped with an electromagnetic gun. The electromagnetic gun can fire projectiles at Mach 7 and destroy targets at a distance of up to 154km, three times that of a conventional gunboat. However, the US recently decided to kill this electronic artillery project due to the high cost to replace it with a missile system.