In November 2019 in the Arctic, the tests of the Kinzhal hypersonic missile of the Russian Air Force were successful; this is a missile that promises to make the US military struggle to find a way to deal with it.

Armed with Kinzhal missiles (also known as Dagger in English), the Russian Air Force’s strike aircraft can destroy enemy warships of all kinds, including aircraft carriers and escorts ships such as cruisers, destroyers, frigates etc. 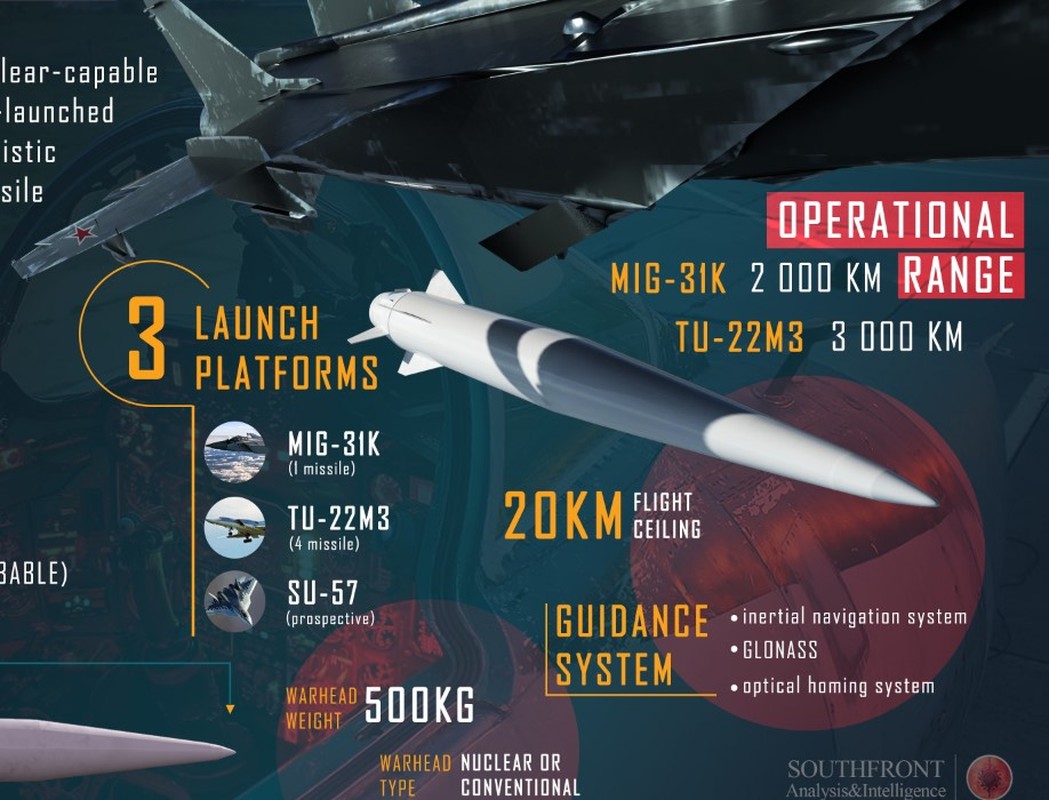 According to the assessment of the Russian Aerospace Corporation (UAC), Kinzhal is no different from the famous Russian version of the Iskander tactical missile but it is an air launched version. So is Russia’s Kinzhal really that good? Can the missile destroy the U.S. Navy’s best defense destroyers of the Arleigh Burke class?

To answer this question, we need to understand that sinking a destroyer, displacement of 8 to 9.5 thousand tons, with a modern air defense system, will exceed the capacity of a single aircraft carrier. conventionally armed combat aircraft.

In recent years, the construction and modernization of airfields have been carried out at a rapid pace at strategic military facilities in the north of Russia. It can be said with confidence that an attack on such modern ships should be done with full force.

The attack will be carried out comprehensively from the ground by Bastion coastal defense missile systems with Onyx anti-ship missiles; from ships armed with Zircon hypersonic cruise missiles and air-launched Kinzhal missiles.

The public first learned about the development of the Kinzhal weapon in March 2018, from Russian President Putin’s State of the Union Address; when he said that the vehicle that launched this missile was the MiG-31K super interceptor.

The main feature of the Kinzhal missile is its flight speed up to Mach 10 and its ability to change course along the entire flight path. This combination of characteristics allows Kinzhal to overcome all existing air defense and missile defense systems

To achieve hypersonic speed, due to the acceleration of the aircraft during the rocket launch, is carried out outside the dense layers of the earth’s atmosphere, at an altitude of 12 to 15 thousand meters. The flight range of Kinzhal rockets mostly takes place near the stratosphere, which greatly reduces air resistance.

To avoid the anti missile system the Kinzhal missile, maneuvering at an altitude of more than 15 km with a speed of Mach 10 and a constantly changing course hence it’s hard to intercept Kinzhal hypersonic missile. And yet, there is no need for a warhead with an explosive mass of nearly 500 kg, with an impact speed of up to Mach 10, which will completely destroy the structure of the ship.

But obviously, it is clear that the crew of the US Navy’s Arleigh Burke-class destroyer are not fools, 26 officers and more than 350 sailors, would not let the missile hit its target. They will find ways to intercept, or jam any incoming missiles.

Kinzhal’s attack target was located below the main deck of the ship, and the circular deviation from the center of the target was only one meter. These can be electronic warfare antennas or control posts for anti-submarine sensors and Tomahawk missile systems. The destruction of these systems, will render the destroyer a useless ship, even if it is still afloat.

Arleigh Burke-class destroyers, with Kevlar anti-fragmentation protection (more than 130 tons of Kevlar fibers are used to protect the ship’s critical areas). Structures and equipment are also protected with high-strength aluminum-magnesium-alloy armor that provides localized debris protection. Not only the ammunition compartment, but also the upper floors of the superstructure, the cabins of the combat communication stations, the radar roof and the cable lines are protected by plates made of this alloy.

The hull of the Arleigh Burke-class destroyer is designed to withstand an extremely high pressure of 0.5 kg/cubic centimeter upon detonation (the warhead mass of the Kinzhal missile is 500 kg). Meanwhile, the standard of US warships is only 0.21 kg / cubic centimeter, so this index on the Arleigh Burke class is more than twice higher.

But will the Arleigh Burke-class destroyer, one of the best-protected destroyers, be “invulnerable” to Kinzhal missiles? The combat experience of this ship and the tactical characteristics of the Kinzhal missile led military experts to identify a number of significant shortcomings in the ships of this class.

When in 2000, the terrorist attack on the Arleigh Burke-class destroyer USS Cole, while refueling in the port of Aden in Yemen, with explosives equivalent to 200-230 kg of TNT, the double-layer hull was destroyed. . The ship’s gas turbine engine was completely damaged, meaning the ship could not move on its own.

The suicide attack on the destroyer USS Cole once again demonstrates the ability to protect individual parts of the hull, engines and weapons with the help of Kevlar materials, especially protection against debris. But experts assert, it cannot protect the ship against the attack of anti-ship missiles. 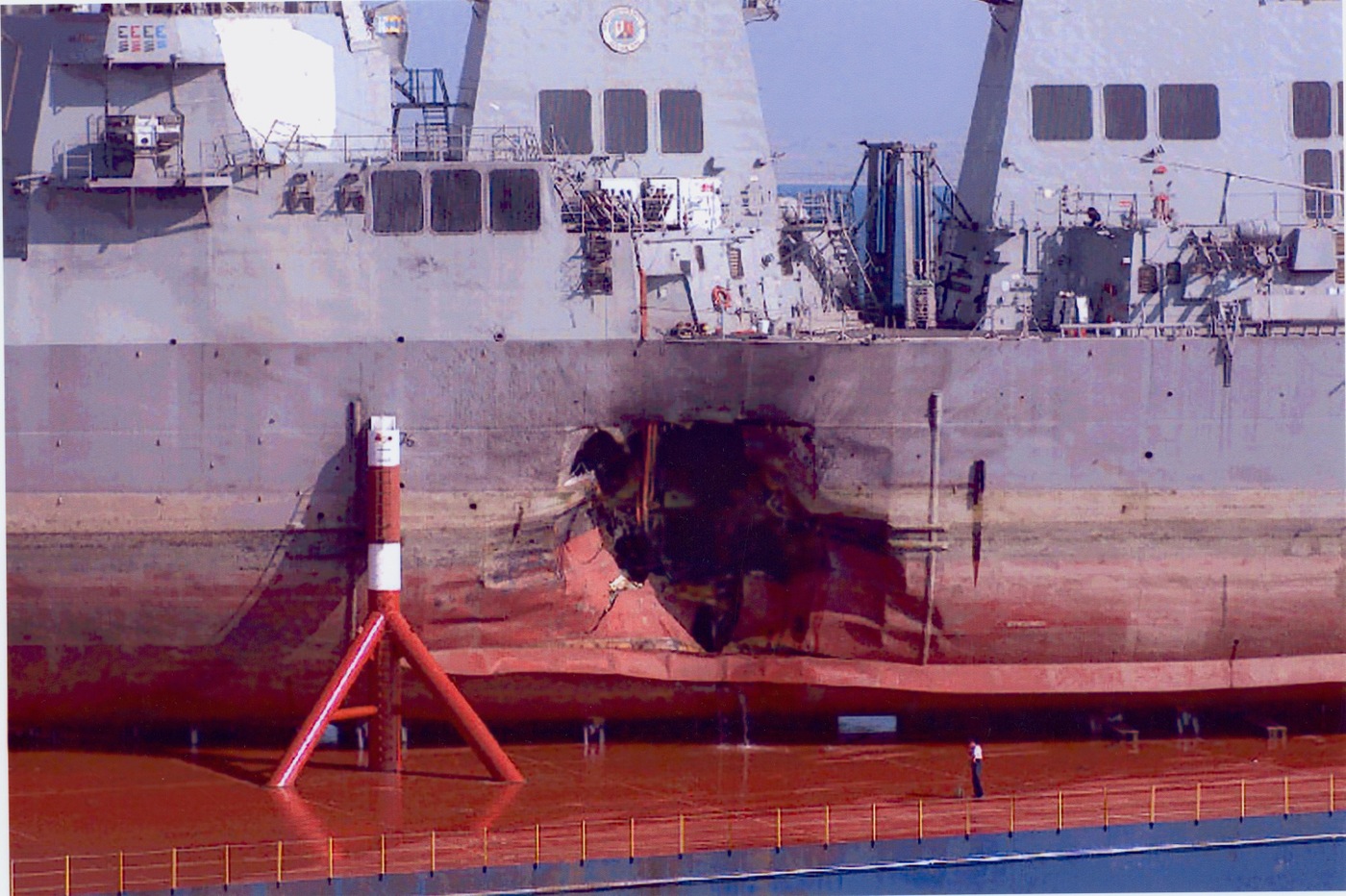 That is why the Americans place such an important role in protecting a ship from an attack from enemy anti-ship missile systems. The design weaknesses will be compensated by the ability to defend against the attacks of anti-ship missiles, torpedoes by the multifunctional Arleigh combat system.

The subsystems of the Aegis multi-role weapons system are closely interconnected, and controls and controls are linked into a single, highly automated system. If Kinzhal hits the combat information center, where the display device is located, it will be guaranteed to deprive the destroyer of the right to process and evaluate tactical information.

An important feature of Arleigh Burke class is the stealth capabilities, especially reducing heat and sound exposure. It is almost impossible to sink a destroyer with a single subsonic anti-ship missile or torpedo.

If a war broke out between the US and Russia involving the Navy, the Arleigh Burke class destroyers with Tomahawk cruise missiles will try to attack russian warships. But with Kinzhal anti-ship missiles will not give American destroyers a chance to launch Tomahawk

Would kamikaze drones be able to send every Russian ship armed with the “Caliber” missile system straight for Moscow?