In the 50s and 60s of the last century, it was a lengendary era of fighter aircraft speed competitions from all over the world. The British Lightning fighter came out in such an era, but Lightning showed the British unique understanding of aircraft design so vividly that it rarely surpassed it in the entire history of fighter jets.

In the early days of the Cold War, in order to counter the possible invasion of the Soviet Union’s strategic jet bombers, the United Kingdom began to independently develop a supersonic fighter with excellent interception capabilities and build its own high-speed interceptor. In August 1954, the Lightning fighter designed by the BAC successfully flew for the first time.

The lightning speed exceeded Mach 1.02 in the third test flight, becoming the first fighter to break the sound barrier in British history. On November 25, 1957, the prototype code-named XA847 broke through the Mach 2 speed and became the fastest flying fighter in the UK at that time. In December 1957, the Lightning fighter was officially enetred service with the Royal Air Force.

The Soviet MiG-21 fighter was tested as a prototype in 1955 and began to be equipped with troops in 1958. Therefore, some people say that the Lightning fighter copied the Soviet MiG-21, which is incorrect. The reason why Lightning and MiG-21’s nose structure are so similar is that similar mission requirements lead to different engineering designs that lead to the same goal.

Although the appearance is still weird, the performance of this aircraft has made pilots full of praise. The lightning’s maximum flight speed was Mach 2.1, and it has also set a record of 26,000 meters of fighter ceiling, which is still unattainable by most jet fighters. The most powerful flight performance of the Lightning is its unparalleled climb rate. It can climb to an altitude of 15,240m. in one minute, which is equivalent to climbing 254 meters per second. With this climb rate of the Lightning fighter it can easily kill most new models fighter. For example, in the 1980s, the Russian Su-27 fighter jets set a world record of climbing 9,000 meters in less than 50 seconds, and the modified aircraft of the American F-15 fighter created a world record of climbing 12,000 meters in 60 seconds. The climb record is always held by lightning.

Therefore, the Lightning is actually an interceptor, which was designed to be able to climb to a height of 15,000 meters in one and a half minutes. The rate of climb is critical to the success or failure of an interception operation. For example, during World War II, Germany’s strongest FW190D propeller fighter can fly at the ultimate speed of a piston propeller aircraft of 740 km/h. But its sea level climb rate is only 857 meters per minute, which is roughly equivalent to a climb of 14 meters per second, which is only a fraction of the climb rate of modern jet fighters.

During World War II, if a propeller fighter took off from the airport to intercept an American B-29 strategic bomber at an altitude of 10,000 meters, it would have to climb for half an hour after takeoff before it could fly above 10,000 meters. This led to the extremely low efficiency of the propeller fighters at that time in intercepting high-altitude strategic bombers. By the 1950s, the climb rate of jet fighters had been greatly improved. One of the best was the USSR Mig-21 jet fighter. During interception operations, the MiG-21 only needed 60 seconds to climb an altitude of 58,000 ft. This is why, in the 1950s and 1960s, the world’s major air force powers were desperately developing high-speed jet interceptors. 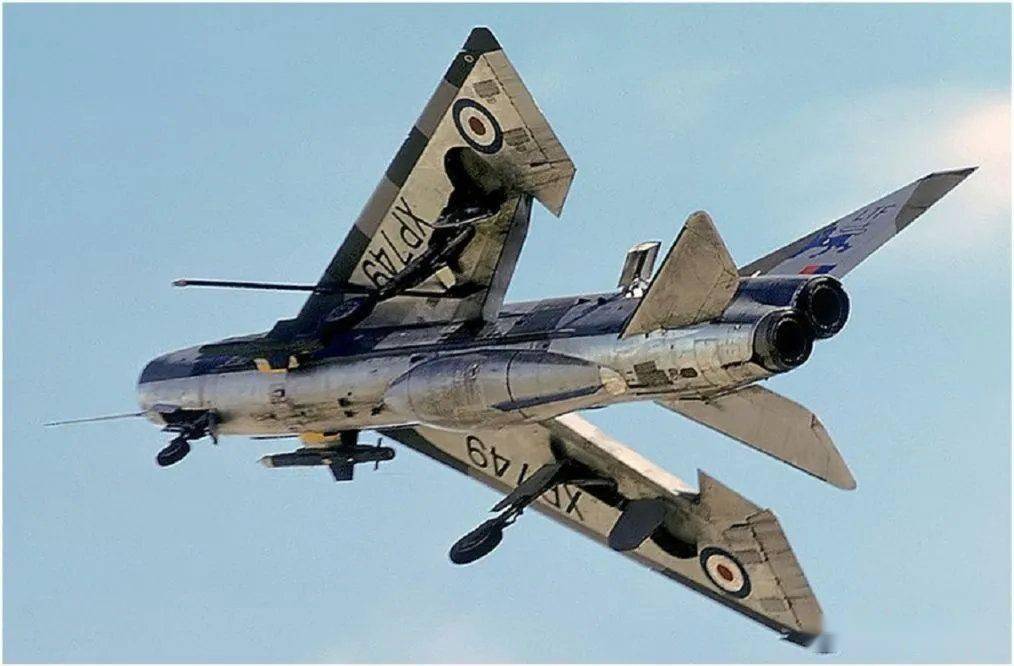 The British Lightning fighter adopts a weird top and bottom layout structure. Equipped with two Rolls-Royce AVON 301R/302R turbojet engines, the maximum thrust of a single unit was 71.17 kN. Such a peculiar design has the advantage of minimizing the frontal area of ​​the aircraft, effectively reducing flight resistance and improving air intake efficiency. Moreover, it had a better single-engine shutdown processing ability, and there was no problem of asymmetry of double-engine thrust, which has a lot to do with the lack of reliability of the engine at that time.

The Lightning fighter uses a sharp intake cone + round nose intake, and the nose structure is very similar to that of MiG-21 fighters. What is the protruding vertebral body used for? In fact, this protruding cone is called the intake cone (shock cone), and its main purpose is to adjust the speed of the air entering the fighter engine. To put it bluntly, it is to adjust the airspeed to the extent that the engine can accept and use.

Generally speaking, ordinary jet engines, such as turbojet and turbofan engines, generally require subsonic air to complete their work, otherwise the engine will be overwhelmed. If it is a subsonic fighter, such as the MiG-17, or a fighter with a little supersonic speed, such as the F-100, the flying speed is not too high, and the airflow speed of the nose intake can be naturally slowed down and enter the engine, So no special measures are required.

When the speed of the fighter plane exceeds Mach 1.5, the high-speed air rushing in from the intake port, if there is no adjustment device, will cause the engine to stall and other malfunctions. With the existence of the intake cone that regulates the airflow speed, this problem is solved very well. In fact, this intake cone does not keep its position unchanged. The position of the nose intake cone will move back and forth with the speed of the aircraft.

Because the air intake duct that originally runs through the whole body takes up a lot of internal space, and the vertical layout results in a small cross-sectional area of ​​the airframe, it cannot have a large internal space like a fuselage with side-by-side engines. Fuel tanks and weapon compartments had to be additionally provided with a streamlined bulge on the belly to house them.

The main task of the Lightning fighter is to defend the airport. This is not a joke. Because the combat radius was only 350 kilometers, the Lightning fighter force is usually stationed on the airport where the 3V nuclear bomber was deployed, and it rushes to intercept the incoming Soviet bombers in wartime. Then buy time for the 3V bomber to hang the nuclear bomb to take off.

The only actual combat of Lightning fighters was during the Gulf War in 1990. At that time, the Kuwait Air Force had several Lightning fighters, but they were bombed at the airport before they took off to participate in the battle.