Of course, in order to enhance the comprehensive combat strength of the B2 stealth strategic bomber, the B2 not only adopts a flying-wing aerodynamic layout with excellent inherent stealth ability, but also integrates many “black technologies” that are still trendy up to now, such as stealth paint Layers, S-type air intakes, infrared suppressors, common-type array radars, etc.

These excellent black technologies not only give B2 the confidence to penetrate enemy air defense identification zones, but also make the price manufacturing cost higher, so this is the core reason why the B2 stealth bomber spent a lot of money on research and development, and finally only 21 were equipped. So why hasn’t any country copied it? After all, the comprehensive combat strength of the B2 stealth strategic bomber can never be compared with money. For example, without mid-air refueling, its combat range can reach 12,000 kilometers, and it can reach 18,000 kilometers with one refueling in the air. The air flight time for each mission is generally no less than 10 hours, and the US Air Force says it has “global reach” and “global destruction” capabilities.

Cost is the biggest problem

What about other countries? Although most countries at this stage can get up to 59 billion US dollars in research and development costs within 10 years, it is a pity that this is the 1980s before inflation. If it is put today, the same technology, research and development The cost will be at least 30 times higher, which is 1.7 trillion US dollars.

As I said at the beginning of the article, if the construction cost of B2 is converted into weight, the price per ton is three times more expensive than gold of the same weight, even if it is not considered as high as 30 times. Affected by inflation, the unit price of 2.4 billion US dollars is also unbearable for most countries. After all, the number of military equipment with the same weapons and equipment is not too small. Even in the United States, when the mass production of B2 stealth bombers began in the 1990s, the number of constructions was reduced from the original 159 to 21 due to the high manufacturing cost.

In addition to the sky-high manufacturing cost, the maintenance cost is also ridiculously expensive, because the entire body of the B2 is sprayed with a stealth coating. This stealth coating needs to be re-sprayed on a regular basis. It also needs to be checked and repaired after each landing. Aircraft hangars also need to maintain “constant temperature and humidity hangars with very expensive construction and operating costs. For example, the price of B2 spraying a stealth coating is close to 60 million US dollars, and the daily maintenance cost is also ridiculously expensive. The cost of B2 1 hour flight is $135,000. The maintenance cost alone is close to 20 billion US dollars.

As B2 stealth bomber flying wing aerodynamic layout is different than the traditional one, so the design direction on avionics systems on aircraft is also very different, for example, arranged on the leading edge of the flap B2 The slot array radar, the air-to-ground scanning common-type array radar under the nose, and of course, many electronic devices must be hidden inside or on the surface of the fuselage, so the development of avionics systems is also very difficult, after all, for most countries, this is an option from scratch.

Because no traditional fuselage and wings in B2, it includes a built-tank shells arms, and bay in the main fuel tank and so need an integrated fuselage structure embodied, then higher requirements are put forward for the structural design, structural materials, and manufacturing methods of aerospace manufacturing. In particular, the built-in bomb bays and landing gear bays of the flying-wing type are arranged in key positions, making it impossible to realize the overall manufacture of the fuselage. In addition, the wingspan is very large, and there are also very large requirements for the structural strength under different flight conditions. 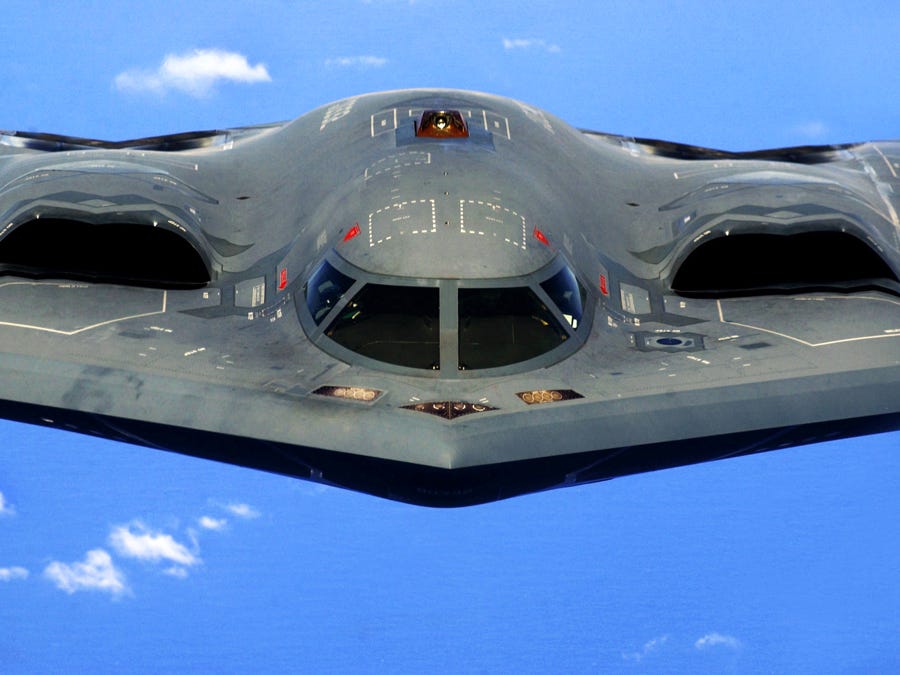 In addition to radar stealth, whether it is a fighter or a bomber, the temperature of the high-temperature gas emitted by the engine is very high, which can often reach thousands of degrees, so it will be a big trail for the enemy’s infrared scanning equipment. To this end, it was necessary to install equipment that can quickly cool down the engine tail nozzle. This technology does not seem to be involved in fighter jets, but it is very critical, but only the United States has this technology in the world, so this technical barrier cannot be broken. F-22 also use the same tech to reduce heat signature

Of course, there are no absolutes in the world. The United States cannot always be a military power, and it cannot always use force to coerce its opponents. Therefore, with the development of the times and science and technology, there will definitely be some countries that have also developed a flying-wing aerodynamic layout, which can be better than the B2 Stealth bombers and more advanced strategic bombers come out in coming years