Advanced medium combat aircraft (AMCA) is an Indian programme to develop a stealth, multirole, air superiority fighter for indian Airforce and indian navy. It is inspired by F-22 5th generation fighter jet. It is designed by Aeronautical Development Agency which is constituted under DRDO. It will be produced as joint venture between public-private i:e; DRDO, hindustan Aeronautics limited and an Indian private company. Its development cost is estimated ₹15000 crores.

AMCA will be a single-seat, twin-engine aircraft. The AMCA Mark 1 will come equipped with 5.5 generation technologies and Mark 2 will have the incremental 6th generation technology upgrades. The AMCA which is intended to perform a multitude of missions including Air supremacy, Ground-Strike, Suppression of Enemy Air Defenses (SEAD) and Electronic Warfare (EW) missions would be a potent replacement for the Sukhoi Su-30MKI air superiority fighter, which forms the backbone of the IAF fighter fleet. The AMCA design is optimised for low radar cross section and supercruise capability.

The AMCA is designed with shoulder mounted diamond shaped trapezoidal wings, a profile with substantial area-ruling to reduce drag at transonic speeds, and a stabilator V-tail with large fuselage mounted Tail-wing. Flight control surfaces include leading and trailing-edge flaps, ailerons, rudders on the canted vertical stabilizers, and all-moving tailplanes; these surfaces also serve as Air brakes.

The AMCA is designed to produce a very small radar cross-section, to accomplish this it features “S-shaped” air-intakes to reduce radar exposure to the fan blade which increases stealth, uses an internal weapons bay and features the use of composites and other materials. The flight control surfaces are controlled by a central management computer system. The AMCA will have some sixth generation characteristics such as an optionally manned, directed energy weapons, capable of controlling UCAVs and swarm drones.

The ADA has planned a 10-year roadmap for making the first five prototypes and for flight testing. The five prototypes will cost close to Rs900 crore each. But, later on in the production process, the cost is expected to reduce drastically.

As per defence scientists, prototypes always cost more because they are also test vehicles. However, since the AMCA is largely indigenous, it would be cheaper than an import. The basic aircraft (excluding the cost of weapons, maintenance and upgrades) may be around 50 per cent to 60 per cent cheaper. The lifecycle cost will also be around 70 per cent cheaper.

ADA plans to roll out the first AMCA in 2026 followed by four more AMCA that will cost 900 crores each initially, but the prices will fall when it enters full-scale production but it is still cheaper than Rafale which was brought for Rs 920 Crores each.

production of the Mark-1 jets slated to begin in 2030-31 under the “aggressive timelines” set by DRDO and its Aeronautical Development Agency (ADA). However, the development agency anticipates that after four years of flight testing, the time frame can be cut to 2028-29.

According to reports, the Indian Air Force has committed to procuring 40 AMCA Mk-1 fighters and at least 100 Mk-2 derivatives, as well as unmanned variants. The Advanced Medium Combat Aircraft (AMCA) would be stealthy and capable of “supercruise.”

The agreement calls for India and France to collaborate on the development of a 110 KN (Kilonewton) engine for India’s fifth-generation fighter jet. The engine is expected to power the Mk2 — the AMCA’s second version, with the first powered by the GE414 engine.

AMCA will have advanced situational awareness. This is achieved through multi-spectral sensors placed across the airframe and allows the pilot to have a 360-degree visual without having to manoeuvre the fighter,” said Fairoza. This, in turn, facilitates “First Look, First Kill”—the AMCA pilot would detect and destroy the target without the enemy ever knowing about the threat. The cockpit will have a 3D audio warning system and the facility for voice-activated commands, reducing the workload of pilots so that they can better focus on missions.

The most important part of the avionics though is an “electronic pilot” feature. Conventionally, a fighter platform requires two pilots. One is a flying pilot and another one is a mission pilot (who directs the flying pilot). This jet will have only a single cockpit accompanied by an electronic pilot. 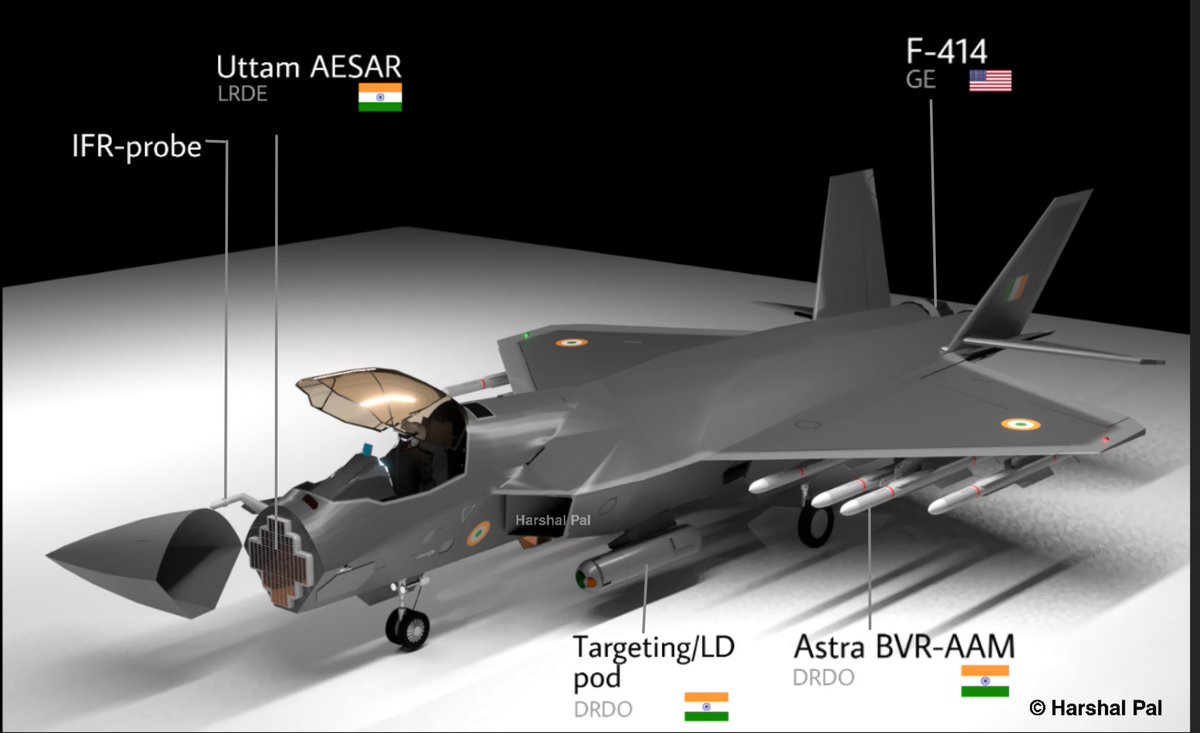 The AMCA is expected to have distributed passive sensors with Artificial intelligence (AI) assisted multi-sensor data fusion to increase situational awareness and to work in tandem with the advanced electronic warfare (EW) suite onboard AMCA. The AMCA has a distributed processing system employing fast processors and smart subsystems. The AMCA will also have an integrated vehicle health monitoring system which works on sensor fusion.

AMCA will be equipped with a larger and powerful variant of the Uttam AESA Radar which will use gallium nitride (GaN) technology. It will be mounted on a mechanically steerable mount.

The aircraft is designed to tackle both air-to-air and air-to-ground operations with equal lethality. The AMCA will be fitted with Brahmos-NG (next generation) air-to-ground missiles, Astra air-to-air missiles, anti-tank missiles, Rudram anti-radiation missiles, laser-guided bombs and precision munitions. The avionics for pilot’s communication and sensors, radars and infra-red search-and-tracking features make the fighter most advanced in Asia.

AMCA can perform a deep-strike without ground support. Even the most advanced fighter jets, like the Dassault Rafale, needs the support of another aircraft or ground support.” She said the F-35 was the only platform that had similar capability.

India could become the fourth country to field an indigenously developed stealth fighter aircraft with the AMCA. However, Turkey is also seeking its fifth-generation aircraft, the TF-X, with a launch date that is nearly identical to that of the Indian AMCA.

The advancement of the AMCA program would be a significant step forward for India, which is facing a deficit of combat aircraft in comparison to the required strength, as well as the belligerent neighbors on its borders.