The Soviet-made AK-47 and the American M16, the primary assault rifles deployed during the Vietnam War, became symbols of the long conflict.

During the Vietnam War, two of the most famous firearms of modern times emerged as icons of the latter half of the turbulent 20th century. The Soviet-made AK-47 and the American M16 were both developments that followed the deployment of the world’s first true assault rifle, the Sturmgewehr 44, by the German Army during World War II. There were obvious advantages to the rifle that could be fired in automatic or semi-automatic mode without requiring the soldier to operate a bolt, and the clash between the Ak-17 vs the M16 characterized modern combat with the Vietnam War serving as a proving ground. 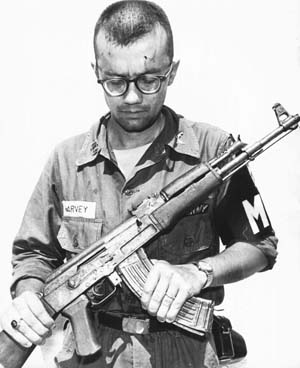 The father of the AK-47 rifle was Soviet arms designer Mikhail Kalashnikov, and it is believed that since the rifle entered production in 1949 over 75 million examples of the original or its improved variants have been manufactured, more than any other firearm in history. The AK-47 has developed a reputation for simplicity and rugged reliability. It has also become a common weapon in the Third World and a symbol of the revolutionary, the insurgent, and the terrorist. While the AK-47 was shipped to Vietnam in great numbers to equip the North Vietnamese Army and the Viet Cong insurgency, it also armed the Soviet Red Army and its Cold War allies of the Warsaw Pact.

The AK-47 rifle is a 7.62mm gas operated rotating bolt selective fire assault rifle. It is capable of a cyclical rate of fire up to 600 rounds per minute and is usually fed by detachable 30-round magazines or 20- and 40-round box magazines. The AK-47 combines the best qualities of other assault rifles, including the gas ejection system of the Sturmgewehr 44, the trigger and lock features of the American M-1 Garand semiautomatic rifle of World War II, and the safety mechanism of the Remington Model 8 designed by American John Browning.

During the Vietnam War, the AK-47 earned the grudging respect of the American fighting man, even as his own M16 became the subject of controversy. The most recognizable variant of the original AK-47 is the AKM, which entered service in 1959 and was regularly encountered in Vietnam. Its famous silhouette is recognized around the world. 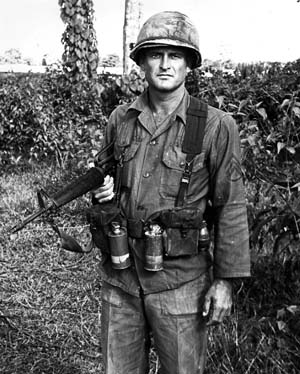 The origin of the M16 rifle lay in the design prowess of American engineer Eugene Stoner, whose 7.62mm rotating bolt AR-10 was the forerunner of the famous Vietnam-era assault rifle. In 1956, the Armalite Division of the Fairchild Aircraft Corporation began producing the AR-10, and the weapon was immediately recognizable with its straight-line barrel and components that were made of phenolic resin.

The AR-10 was rechambered to fire the .223-caliber Remington round and renamed the AR-15 in 1957. Shortly thereafter, Armalite licensed the production of both rifles to Colt. Subsequently, the U.S. Army adopted it as the M16, its standard issue assault rifle, firing the NATO .556mm cartridge.

M16 Rifles are forever tied to U.S. involvement in the Vietnam War. Typically fed by 20- or 30-round box magazines, the rifle was capable of a cyclical rate of fire up to 950 rounds per minute. The military version remained easily recognizable with its top-located carry handle, large triangular front sight, and polymer and aluminum alloy components. The first M16s reached Vietnam with American advisors in 1963, and the initial production model was designated the M16A1.

During the Vietnam War reports surfaced that early M16s were prone to jamming due to fouling of moving parts and a condition called “failure to extract.” However, the service life of the rifle validates its overall commendable performance. Variants of the M16 remain in production, and it is still in use with some armies today. More than eight million have been produced during the last half century. 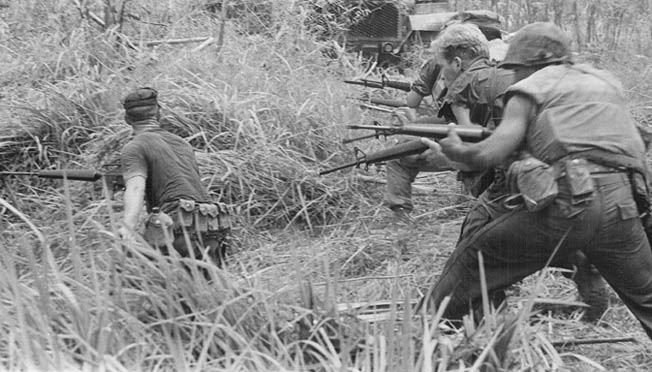