As an most powerful nation in the European Union, France’s national strength is now much worse than before. The speed of replacement of the main battleships of the French Navy is even worse than that of the old rival Britain, and the attack nuclear submarines as an underwater strategic strike force have not been updated for many years. The first new generation of barracuda-class attack nuclear submarines of the French Navy was put into service after 15 years of construction and rigorous sea trials.

According to information published by the French Ministry of Armed Forces on June 3, 2022,  France’s new defense minister Sebastien Lecornu arrived in Brest, the main military port and shipbuilding base in western France (on the Atlantic side), and inspected the new generation of barracuda-class attack nuclear submarines “Suffren” (hull number Q284) on the same day, which is the first boat of the six “Barracuda” class and the first of the second generation of attack nuclear submarines of the French Navy.

The new nuclear submarine was actually built as early as December 2007 at the “Naval Group” Cherbourg Shipyard, but it was not launched until August 1, 2019, which took nearly 12 years, and then after outfitting and sea trials, it was delivered in December 2020, and then the French Navy began to test it, and trained the crew, which took 1 and a half years and this month it was officially commissioned, which means that it has a certain initial combat capability, which is equivalent to the IOC often spoken of in the United States. 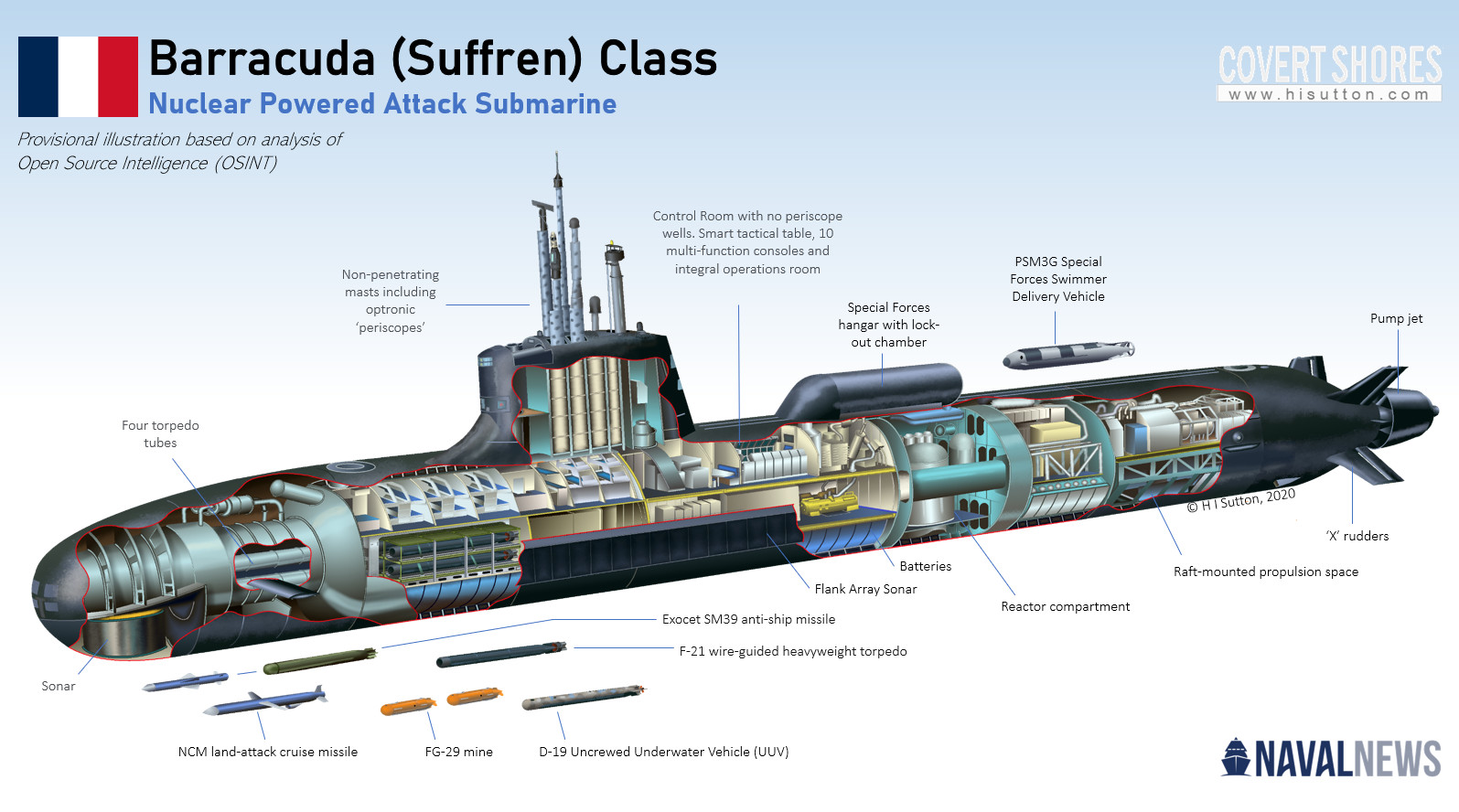 In December 2006, France placed an order for naval group and Areva (a world-renowned nuclear power manufacturer) to supply the K15 pressurized water nuclear reactor, spending 7.9 billion euros to build six barracuda-class vessels, which were originally scheduled to enter service at the end of 2016 or 2017, However, they have been postponed for more than 5 years. A barracuda class cost about 1.32 billion euros (about $1.4 billion), which is much cheaper than the Agile class built in the United Kingdom.Image: The Suffren at the time of launch

The Barracuda class is 99 meters long, 8.8 meters wide, has a surface displacement of 4700 tons, an underwater displacement of 5100 tons (another version is 5300 tons), it uses two “Charles de Gaulle” nuclear aircraft carriers and Triumph class ballistic missile nuclear submarines used K15 pressurized water reactors, with a speed of more than 25 knots, sea self-sustainment of 70 days, dive depth of 330 meters while maximum depth it can dive is more than 350m.

From the perspective of tonnage, the Barracuda class is the smallest of the latest attack nuclear submarines in active service, the seawolf and the Virginia Class are more than 7,000 tons, Russia’s Type 885 Yasen class displacement reached more than 11,000 tons, while the French Navy’s active Rubis class submarine displacement is only 2600 tons, smaller than many conventional submarines, the Barracuda class inherits the French nuclear submarine tonnage is small, suitable for combat in the “Mediterranean bath” characteristics.

Compared with the Triomphant class, the barracuda class has made technological progress. It uses a similar pump-push water propulsion system, the noise is the “1/1000” of the fearsome class of The first generation of French ballistic missile nuclear submarines, it uses an X-shaped rudder that is more suitable for shallow sea maneuvering, the control tower shell has a fill angle in front to reduce underwater drag, and for the first time it adopts a non-penetrating photoelectric mast, which can take 4K images, and the crew living environment is also significantly better than the overly compact Rubis class.

In terms of weapons, the Barracuda class is the most advanced maritime strike weapon that can be used in the French arsenal. It has four 533mm torpedo tubes, which can probably carry 20 underwater weapons, for the first time through the torpedo tube can launch the MdCN land attack cruise missile known as the “French Tomahawk”, the standard “Flying Fish” SM39 submarine-launched anti-ship missile, its use F21 wire-guided electric heavy torpedoes, due to the small tonnage, the Barracuda class and the British astute class are not equipped with VLS, However, the Barracuda class can also carry fewer weapons and launch tubes like  Astute class submarineImage: The Suffren test-fired MdCN submarine-launched cruise missile

In fact, the French Navy’s need for a new generation of attack nuclear submarines is extremely urgent, 6 Rubis class was commissioned from 1983 to 1993, the No. 2 boat “Saphire” has been decommissioned in 2019, and worse during repairs in the dry dock in June 2020, the last Rubis class submarine “Perle” (commissioned in 1993) caught fire., the bow was all destroyed, had to be “head-changing” with the decommissioned “Sapphire”, It won’t be back until at least 2023, and the first ship, the Rubis, has been in service for 39 years.

As a “fresh force”, the 6 “Barracuda” class has only the first boat in service so far, and the second submarine is said to be launched in the middle of this year, and all of them are still far away, in order to restore the former maritime glory, France’s money bags and industrial capacity have not been allowed.