Rushing to flee or quickly surrender when under attack, Afghan government troops have left the Taliban with a multi-billion dollar arsenal of state-of-the-art US-equipped weapons.

Previously, US President Joe Biden said when defending the controversial US withdrawal decision: “We provide all the tools to our Afghan partners. I emphasize the whole tool.” However, as soon as the US withdrew all its troops from Afghanistan, the Taliban insurgents began to invade government-controlled lands. The rapid withdrawal of US troops also surprised Afghanistan, even many people and government members felt hurt by the US decision.

The fierce attack of the Taliban insurgents made even the US surprised, the situation rotated continuously to the point of dizziness. US intelligence in early August also said that it would take at least 90 days for the Taliban to reach the capital Kabul.

Even the most pessimistic person when assessing the war situation in Afghanistan could not believe that in less than two weeks, the Taliban had captured all major cities and closed in on the capital, Kabul.

And now according to the latest news, Taliban insurgents have attacked the capital Kabul and captured the parliament, gun battles are going on and they have even captured Kabul University. While President Ashraf Ghani flew to Tajikistan with his family in a special plane.

Currently, Afghan government troops are largely demoralized, constantly leaving their weapons behind as they rush to flee the besieged major cities. They even fled even before they had time to fight the Taliban.

As soon as they captured this huge amount of weapons, most of them were used by the rebels to continue attacking government forces Images on social networks show that Taliban insurgents occupy a large arsenal of weapons. large of Western origin. 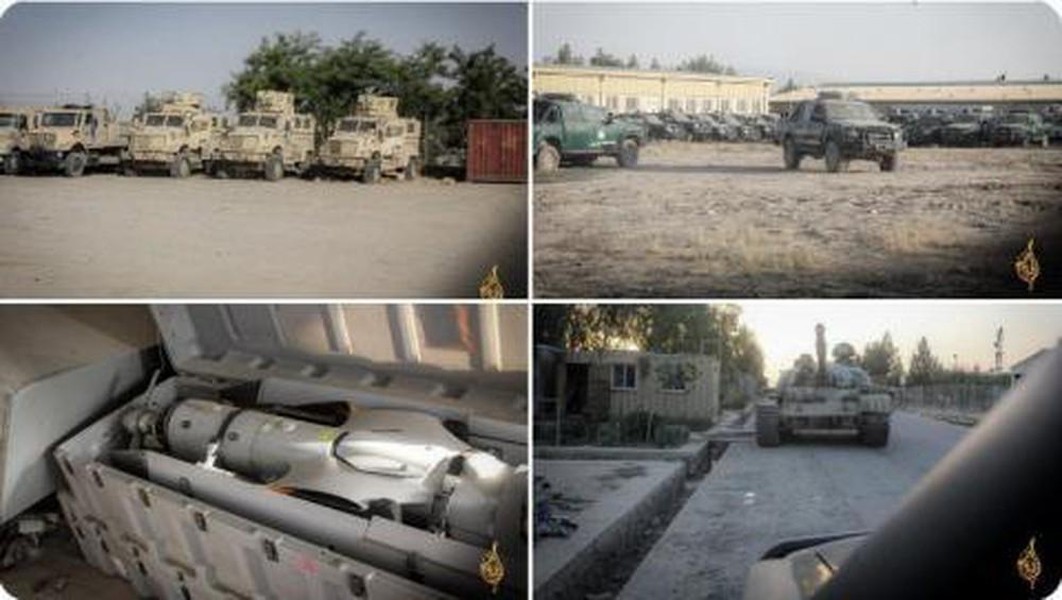 Afghan troops fought only moderately and quickly surrendered in the northern city of Kunduz, motorized vehicles laden with heavy weapons and artillery falling into the hands of the rebels.

In the western city of Farah, Taliban fighters patrol the streets in American-made Humvees that are used by government troops. It is estimated that thousands of armored vehicles equipped by the US in Afghanistan have fallen into the hands of the Taliban.

In Afghanistan’s third largest city of Herat, Taliban insurgents obtained hundreds of guns of all kinds, from M4 carbines to M24 sniper rifles and M249 machine guns, including a series of brand new guns still on shelves.

The rebels also obtained a lot of armor, ammunition and a large number of third-generation American night vision goggles. To this day, even the US-made MD-530F light attack helicopter has been seized by the Taliban. Also, Taliban captured a Mi-35 Hind attack helicopter which was donated by India.

It can be said that most of the weapons the US donates to the Afghan government troops have been seized by the Taliban. Even the multi-purpose helicopter UH-60A seized yesterday 14/8 is still in good condition.

The Taliban also said that they had captured an airport near the capital Kabul and also captured an AC-208B attack aircraft. This is also a US-made aircraft with a market price of about 15 million USD.

In particular, the A-29 Super Tucano, priced at $18 million, also fell into the hands of the Taliban. This is the most powerful attack aircraft of the Afghan Air Force produced by Brazil.

In addition to obtaining weapons from government troops, the Taliban also obtained weapons from the US military itself when they hurriedly withdrew without taking them with.

“US forces are bringing home all of their modern equipment, but the Taliban’s rapid advance has allowed the group to acquire a lot of American weapons,” said Justine Fleischner, an expert at arms tracking organization Conflict Armament Research. based in the UK, commented.

Experts say that these modern Western weapons are “treasures” that help the Taliban significantly increase their combat capabilities. Image of the SCAR super rifle, which is only equipped for US special operations forces in Afghanistan, falls in the hands of the Taliban

From a force that only uses small, outdated weapons, the rebel group now possesses a range of weapons and equipment manufactured by the US and its allies without spending a single penny.

“They do not only helped the Taliban push their momentum into Kabul, but also consolidating the rebel group’s power in the cities that have been captured. This is a very serious problem. That amount of weapons gives an advantage. huge for the Taliban,” said Raffaello Pantucci, an expert at the S. Rajaratnam School of International Studies in Singapore.

The US has prepared for the scenario that the weapons of the Afghan army fall into the hands of the Taliban, but the current situation is considered the worst-case scenario in Washington’s plan.

“The US is arming the Afghan government troops on the assumption that those weapons could fall into the hands of the Taliban. The current crisis is the worst-case scenario they can think of when making a decision to buy weapons.”, Jason Amerine, a former US special agent who helped the Afghan coalition to overthrow the Taliban in 2001, expressed his opinion.

The continued use of American weapons by the Taliban insurgents and the release of them in the media is sad not only for the Afghan military but also for the US itself. However, weapons such as helicopters are unlikely to change the battlefield in the context of the Taliban without well-trained pilots.

“They will only serve propaganda purposes,” said Aki Peritz, a former counterterrorism analyst with the US Central Intelligence Agency, saying that infantry weapons and motor vehicles will bring many benefits. more useful to the Taliban.

This is not the first time that large quantities of US weapons have fallen into the hands of rebels in the Middle East. The Islamic State (IS) group in 2014 captured the Iraqi city of Mosul, forcing the country’s special forces units to hastily withdraw their troops, leaving large amounts of weapons and vehicles to IS.

These weapons were later used by IS in major offensive operations, the most fearsome of which were the Humvee armored vehicles that were converted into “supercar bombs”, helping the militants control large areas in Iraq.

Like ISIS in Mosul, Taliban fighters are now appearing alongside weapons confiscated from government troops across the country. “The government retreat is turning into an escape,” warned Peritz.