In the fall of 2020, the US Armed Forces announced that in just one year they had designed, built and tested a new secret fighter.

This mysterious aircraft is part of the Next Generation Air Dominance (NGAD) program, a US military project aimed at supplementing and then replacing the F-22 Raptor fighter.

In September 2020, Will Roper, serving as Assistant Procurement to the Secretary of the Air Force, stated that the Pentagon, under the secrecy of the Next Generation Air Dominance (NGAD) program, designed, built and at least once flew an X-plane demonstrator, under which means, in particular, a new generation unmanned or manned aircraft, including a sixth generation fighter.

New concept from a recent US Air Force report A new image of the fighter appeared in the US Army’s two-year procurement report, which they released last week. The new aircraft is a large diamond-shaped fighter with air intakes above the wing of the aircraft, to the left and right of the cockpit. 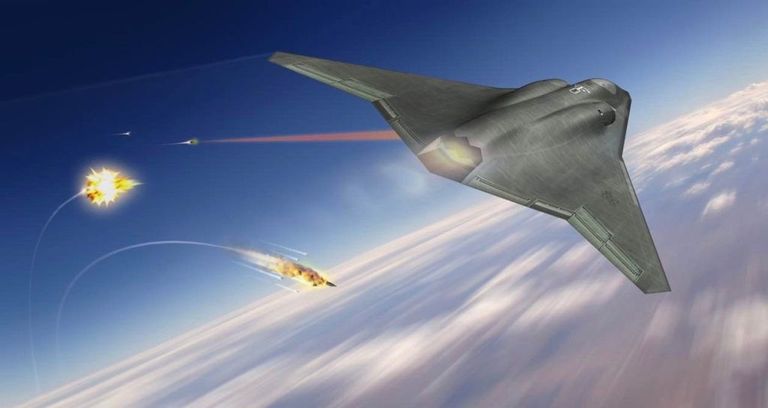 From the NGAD Program Report: “Designed to complement the F-35 and F-22, joint and partner forces for air dominance, Next Generation Air Dominance is an advanced aircraft program with multi-domain awareness, flexible and resilient connectivity,” the fighter is presented together with three versions of air-to-air missiles, landing gear, and engines designated V1, V2 and V3.

The illustration shows an aircraft of an unusual type of integral layout with features of a flying wing and tailless. The machine has a swept wing, the nodules of which are connected to the nose of the fuselage. The wing consoles are trapezoidal in plan. The broken trailing edge slides under the control surfaces and nozzles. The aircraft has a pair of keels, and they are foldable – in some modes, they must lie in the corresponding niches on the wing.

In the nose of the aircraft there is a rudimentary fuselage of limited length, in which the cockpit is located, probably equipment compartments. On the sides of it are developed engine nacelles. The air intakes are brought out to the upper side of the wing and are protected from irradiation from below. Flat nozzles with lattice deflectors are made in a similar way. The aircraft has a pair of turbojet engines of an unknown type. One of the concepts of a future fighter that shoots down missiles with a laser

The dimensions, weight and performance characteristics of this NGAD version are difficult to estimate. Probably, an aircraft of this appearance will be no less than the modern F-22 and may have a large mass. Accordingly, an increase in combat load and an expansion of operational capabilities should be expected. However, information of this nature has not yet been announced.

Stealth remains a key quality of the new aircraft. The structure and contours of the aircraft are formed taking into account the reduction of the reflected signal; reduced chance of being spotted from the ground. Folding keels are an interesting solution: depending on the current needs, they can lie on the wing and reduce the RCS or rise to the working position, increasing the flight and maneuverability characteristics.

The new concept provides for the preservation of the cockpit. It can be assumed that an unmanned version is also being prepared. According to various estimates, the next generation 6 fighters should receive remote or autonomous control facilities. The introduction of artificial intelligence is expected.