The first aircraft in history designed to directly support ground units is still one of the most iconic aircraft ever, Nicknamed Warthog (Warthog Pig), it is a fear of tanks and infantry. His main trump card is a giant rotating machine gun (30 mm GAU-8 Gatling gun). What can such a thing actually do?

1. First the machine gun, then the plane 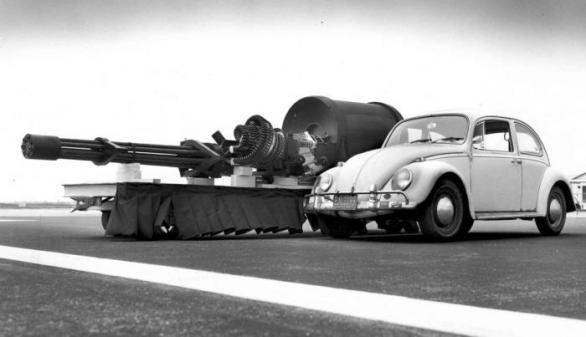 The GAU-8 Avenger machine gun is designed specifically for the A-10. The weapon takes up so much space and weight that the rest of the aircraft is designed around it, not the other way around. In the picture you can see how huge the machine gun and the whole reloading mechanism are. The pilot and copilot are literally sitting on a giant metal penis that is burying enemies with lead. The GAU-8 is such a deadly and brutal weapon that the A-10 does not even mention laser-guided bombs or the popular Maverick missiles. Everyone sees that a machine gun with wings is approaching them, just as with a tank, everyone notices the aimed barrel. 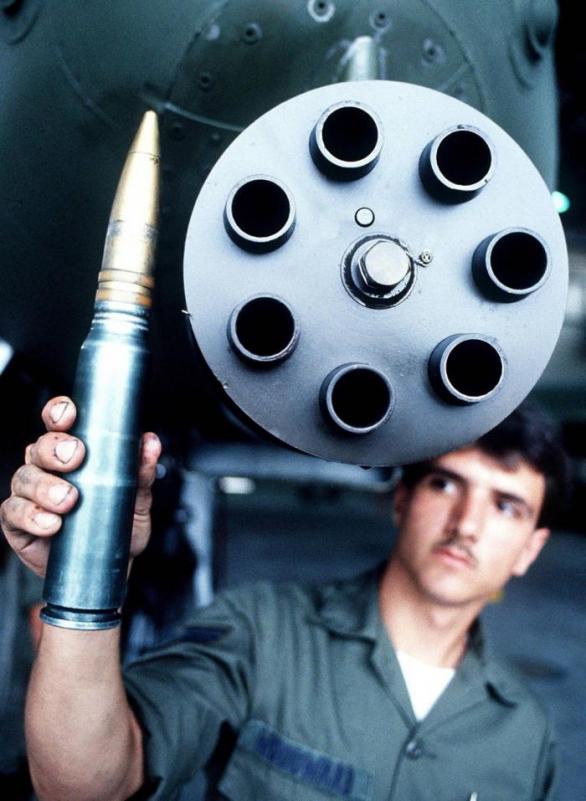 GAU-8 is a seven-barrel rotary machine gun, which measures almost six meters in length and weighs 1.9 tons. Yes, most cars are smaller than this crumb. But now we get to the main attraction – the bullets themselves. The machine gun can pour them at enemies at 3900 rpm and get to full speed in just half a second! However, there are only 1,200 rounds in the magazine, so the pilot must have a very light index finger on the trigger. But take it that each of the rounds (see picture) looks like a bottle of good whiskey. And it weighs from 600 to 800 grams. 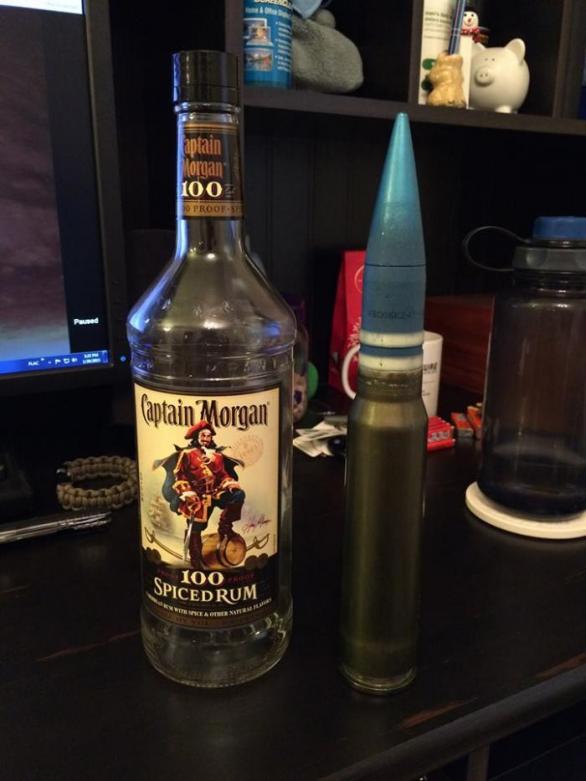 We are talking about a cartridge case with depleted uranium, which after an impact basically explodes and burns thousands of shrapnel to such a temperature that it penetrates even the most durable tank armor. The A-10 is primarily a killer of tanks and armored vehicles. If one of the bullets hits a hull, it will erase it from the earth’s surface in a few milliseconds. 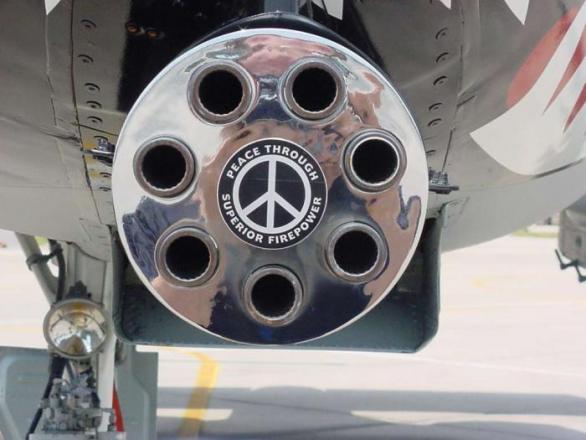 From one and a half kilometers, the A-10 can pour 80% of missiles into a circle with a diameter of twelve meters at full flight speed. Imagine a tank or a bunker and it is clear to you that as soon as you are in the crosshairs, there is amen with you. All you need is a few rounds to turn your stash into a melting furnace. If you are not a terminator, you will not get out of it. What’s more, they won’t have you to identify.

4. And in fact, they don’t even have to hit you 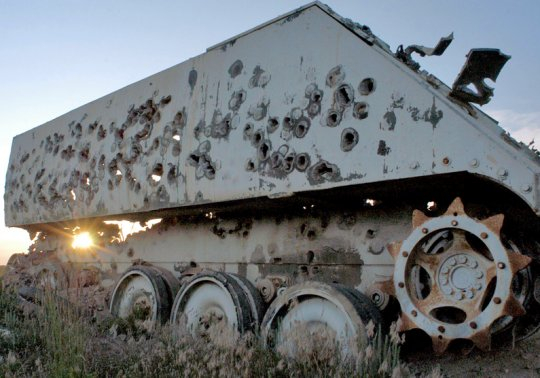 At the same time, the charge itself will most likely not kill you. If you’re unlucky, or actually lucky, to be hit by a 30mm bullet, you’ll just evaporate. You explode into a cloud of pink particles and you are left with a small puddle, which disappears with the heat, which then engulfs the whole area. If the bullet hits the wall behind which you are hiding, you will probably be hit by tens to hundreds of hot little shrapnel. It’s like a fine powder of particles, thanks to the huge temperature, that pass directly through your tissue. You may have seen something similar in Hollywood sci-fi or horror. In the A-10, this is a harsh reality.

5. Ammunition in the safe 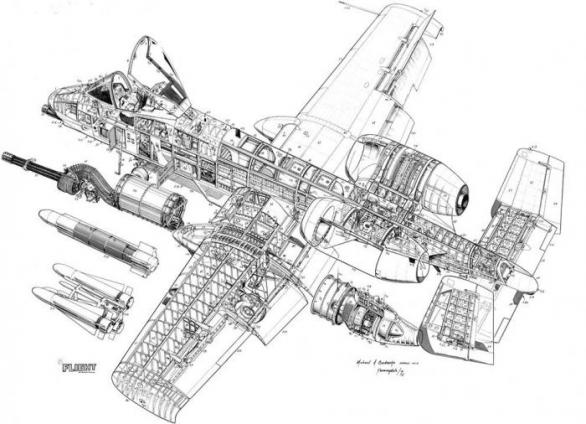 A huge box of ammunition sits directly behind the main fuselage of the machine gun, and the enemies know this, of course. But they are not entitled. When designing the machine, of course, it was taken into account that enemy fire could hit the belly of the aircraft and ignite unfired rounds. Therefore, this part of the aircraft is armored several times and all projectiles are destroyed before they penetrate the fuselage. This, of course, adds weight to the aircraft, but the A-10 is subsonic – tanks and infantry will not run away from it anyway, and other machines are preventing it from fighters, so it can afford a few extra pounds.

All rounds at full speed can be fired in twenty seconds. It’s a little trickier with recharging. Take a look at the following video and you will understand that it is useful when each bullet is aimed at the target. 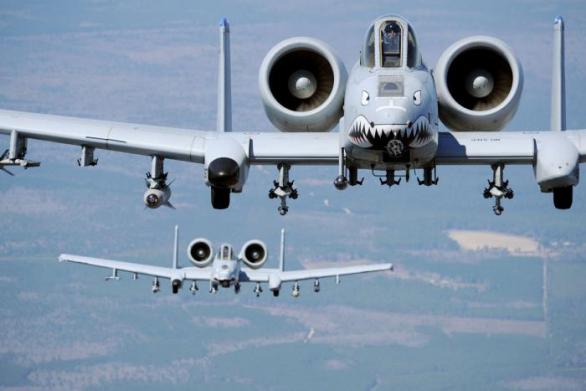 The A-10 has been flying since 1977 and the US military has never sold it to foreign buyers. And that there were! It thus remains a domestic trump card and is likely to celebrate not only forty but perhaps fifty years in the service. Current plans envisage replacing the A-10 by 2025, but it is already clear that this will not happen. The first sharp successes of the A-10 were recorded during the Gulf War, where they destroyed 900 tanks and 1,200 other military vehicles and installations. Plus two helicopters, which were the first air casualties – the A-10 is primarily aimed at ground targets, but what do you do when helicopters start firing at you. Being inside at the moment when the thirty-millimeter cannon was blasting must have been terrifying. 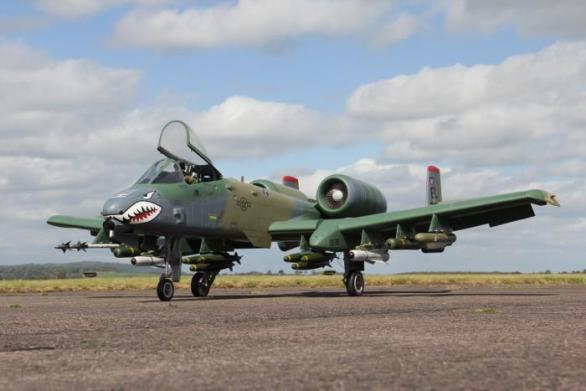 And how will the air force replace him? Originally, there was talk of a new gem of the US Army – the F-35 fighter universal. However, its preparation is dragging on, its operation will be extremely expensive and currently it cannot fully replace all functions, even with the replacement of the brutal machine gun with so-called fragment missiles, which will be divided into tens to hundreds of individual “smart” projectiles along the way. Currently, the situation is such that the army is even considering building a direct successor to the A-10. However, this would take many years and would mean that the A-10 would have many years of service. Engineers have confirmed that it can handle the left rear. Her giant machine gun will apparently sow doom for a long time to come.

How long does it take to start and move an aircraft carrier?