Innovation in today’s world has come to the rescue in many cases, be it during natural disasters, for border security or even helping farmers in agriculture. Drone technology is one such innovation that has emerged as one of the most valued and essential technologies in recent years.

During the floods that devastated North Karnataka recently, when thousands of people were stranded, 22-year-old Pratap NM used his indigenous drones to provide food and other relief material to the affected areas. A BSc graduate from JSS College of Arts, Science and Commerce in Mysuru, Pratap is often lauded as the Drone Scientist.

Pratap started tinkering with drones when he was only 14 years old, and two years later at 16, he had managed to develop a fully functioning drone. Even though it could fly and capture only a few images, it was no less than an achievement for the young boy, who was inspired by the might of the eagle soaring in the sky and Dr APJ Abdul Kalam, India’s top scientist and former president.

Over the course of the next few years, Pratap built 600 drones all by himself. He has so far completed six major projects that includes Telegraphy in Border Security, Drones in Traffic Management, UAVs in rescuing humans and Auto piloted drones and Cryptography in Drone Networking. Pratap’s drones are saving the lives of tribals in Africa by helping deliver medical support in a short period of time.

Pratap has also been invited to over 87 countries to showcase his different kinds of drones. According to Deccan Herald, Pratap has been the recipient of the Albert Einstein Innovation Gold Medal in the International Drone Expo 2018 held in Hanover in Germany, another gold medal in the International Drone expo in Germany and many others. He was recently invited by IIT Bombay to deliver a lecture on drone applications in emergency situations. 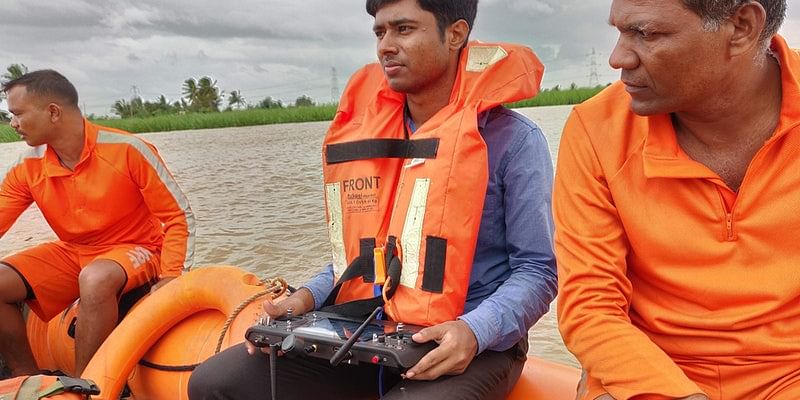 Speaking to Edex Live about his skills, he said, “I use very little money and a lot of e-waste to make my drones. Whenever I win competitions, I am awarded money which I save for the future. And as far as e-waste goes, a lot of it is generated and I get it from electrical shops in Mysuru, Visakhapatnam, Mumbai and a few other cities. For example, if there is a mixer-grinder that is defunct, I can remove the motor and use it in my drone. Similarly, I make use of chips and resistors from broken televisions to build my drones. It doesn’t matter what the prototype looks like. Proving the technical points of the drone is all that matters.”

He is Pratap aged 22 years. He travels 28 days in a month to foreign countries.France has invited him to join their Organisations for which he will be provided with monthly salary of Rs 16 Lakhs, 5 BHK house. and Car worth 2.5Cr.But he simply declined. PM Modi has honored him with suitable award and has asked DRDO to absorb him.
He was born in a remote village in Kadaikudi near Mysore Karnataka. His father earns Rs 2000 as a farmer. Pratap was interested in Electronics right from childhood. While studying plus 2 he acquainted himself with various websites such as Aviation ,Space, Rolls Royce car, Boeing 777 etc from a nearby Cybercafe .He sent several emails to Scientists all over the world in his Butler English about his interest to work but in vain . He wanted to join Engg but due to financial problems he joined BSc ( Physics) again unable to complete the same.
He was thrown out of hostel for not paying the hostel fees. He used to sleep in Mysore Bus stand and used to wash his clothes in public toilet. He learnt computer languages such asC++JavaCore and Python on his own. He learnt about *Drone* through eWaste.After 80 attempts he succeeded developing one such Drone. He went to IIT Delhi in rags in a unreserved compartment to participate in Drone model competition. He won *Second prize. He was told to participate in a competition in Japan.To go to Japan an academic Professor in Chennai college has to approve his thesis .He went to Chennai for the first time and with great difficulty that Prof approved him with some comments that he is not qualified to write it. Pratap required Rs60000 to go to Japan ,a philanthropist from Mysore sponsored his flight ticket and balance money he made up by selling his mother’s Mangala Sutra. Somehow he reached Tokyo after going in his maiden flight to Japan all alone. He had only Rs 1400 when he landed there.
He didn’t take Bullet train since it was very expensive so he went by normal train by changing trains at 16 different stations with his luggage to reach his last station. He walked another 8 km to reach the ultimate destination with his luggage.He participated in a Exposition where 127 nations were participating.The results were announced in a graded manner and finally top 10 . Pratap dejectedly started walking back and slowly the judges were inching to top 3,2, and finally the First prize was announced as . Please welcome Mr Pratap Gold Medalist from India*.He was crying with joy. He saw with his own eyes USA flag going down and Indian flag going up.He was rewarded with 10000$ and celebrations followed everywhere. He was called by PM Modi ,Karnataka MLA & MP and was honoured by all.
France offered him a job with all the perks of very high order. He simply refused and now PM has honoured him and has asked DRDO to absorb him. Respect