India has the bravest soldiers, bravest pilots and bravest navy officers. One of the Best in the world. But, unfortunately, India using them with outdated defense equipment. Why?. Not because India has no funds or no technical inability. The only reason is because of Indian corrupted politicians and laziness. You can assume the capabilities of Indians that India was the first country to made supersonic aircraft in Asia.

It was in early 1980s , when Indian Air Force realised that it needed to replace its Mig-21 since they will be reaching the end of their service life by 1990s which will be a critical fall for Indian Air Force in terms of numbers. Hence the Tejas programme was started which had its own share of problems and was dragged on for many years. Hence what IAF needed was an interim solution. The solution came when it was decided that IAF Mig-21 will be upgraded and its Total Technical Life (TTL) will be extended. The upgrade involved better avionics , armaments , EW suite and more. This helped the Mig-21 to stay for much longer in Indian Air Force. The sole reason why Mig-21 has persisted in IAF till date was due to the fact that Tejas programme faced initial hiccups and thus failed in its objective to replace the older Mig-21 in IAF service.

Recently IAF has retired its Mig-21 Type 96 Aircrafts as Tejas programme has started to bore results with Tejas now being actively inducted in Flying Daggers Squadron of IAF. At present IAF uses only Mig-21 Bison/bis aircrafts which will be retired from service in the coming years. 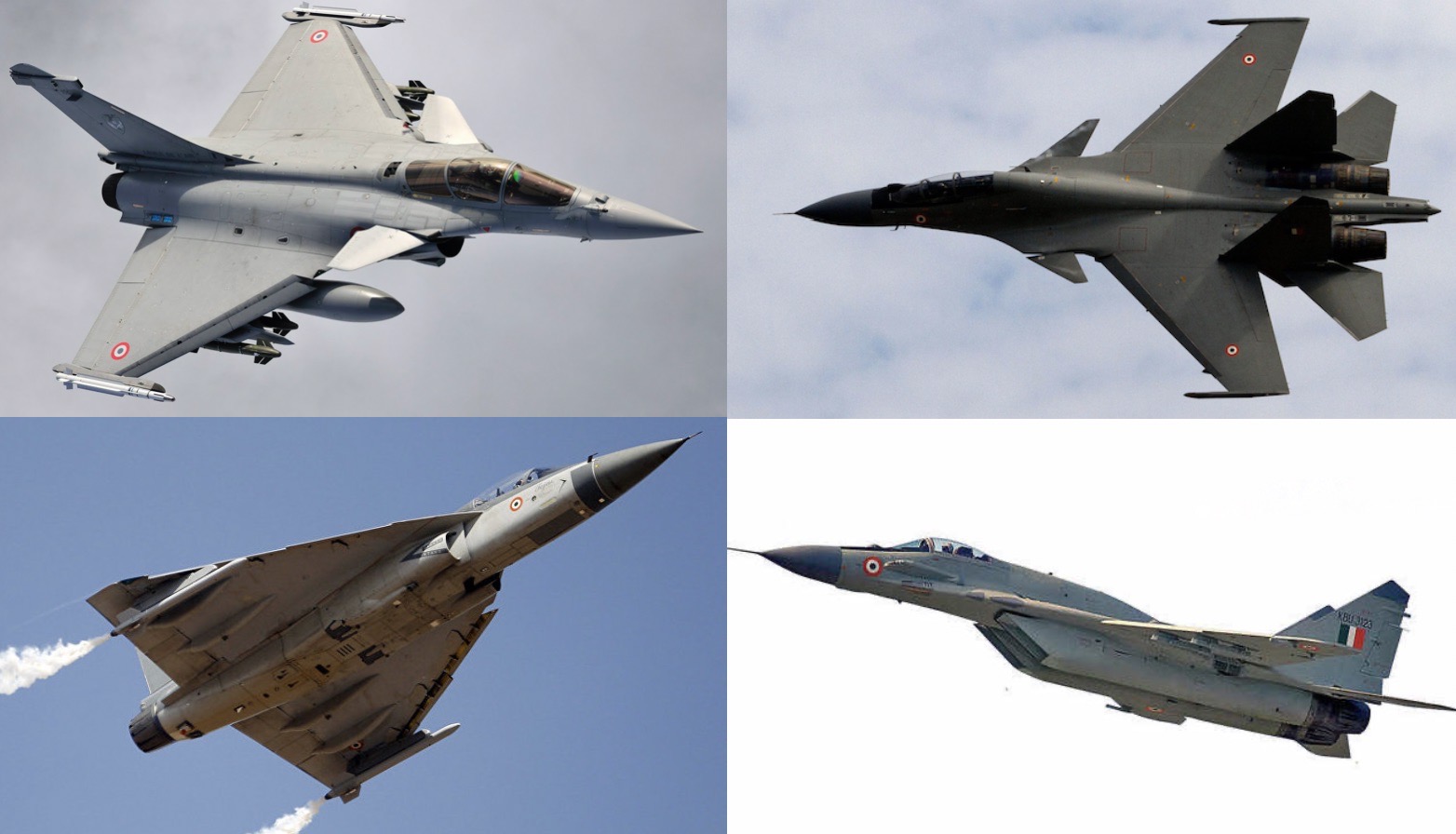 Defence View has compiled an inventory of the IAF’s fighter fleet by speaking to sources. The list is categorised by type of aircraft — from the oldest to the most modern.

Indian Air Force does not use Mig-21 from the 1960s era but instead uses a Locally-Manufactured Upgraded version named “Bison” derived from the Mig-21 “Bis” Type-75, the last of which was locally manufactured in 1985.

The Mig-21 Type 75 aka the “Bis” variant was another addition to the Mig-21 Inventory of Indian Air Force and came with Standard Modernized Avionics, Search & Track Radars, IFF Systems and Radar Warning Receivers. As the upgradation program of the Mig-21 kickstarted, some 125 Mig-21 “Bis” was chosen to be upgraded by Hindustan Aeronautics Limited (HAL) and MiG-MAPO in the consortium of several other Technical Agencies.

The upgrade added some Next Generation Capabilities to the Mig-21 like a new Phazotron NIIR’s Kopyo Multimode Radar, SURA Helmet-Mounted Sight, El-Op Head-up Display (HUD), Tarang Radar Warning Receiver, Elta EL/L-8222 self-protection jamming pod and capability to use Beyond-Visual Range Missiles like R-77. Mig-21 “Bison” is the only Mig-21 variant that now serves with the Indian Air Force besides some other Trainer Aircraft like Type 66 Mig-21 which are used to train Rookie Pilots on Mig-21.

So, Mig-21 with all the tweaks and turns isn’t exactly the same platform as the baseline Fishbed model and has successfully adapted to the ever dynamic Art of Modern Warfare with news advents in Weapon Package, Avionics and Electronic Capability, until the 21st Century kick-started in. With the 21st Century, there have been radical changes in Aerial Battles, with the inclusion of Airborne Warning and Control Systems which changed the face of Battlefield of not being only dependent on the Kinematics but also the Information Warfare. In a seemingly complex environment, even an inferior platform well connected with more advanced surveillance platforms can take on superior platforms with impunity.

Mig-21 displayed this aspect during various Cope India exercises where the Mig-21 used to possess a Data Link with Indian Air Force Su-30K/MK who would use more powerful radars to get a view of the Battlespace, and scored kills against USAF F-15C Fighter Aircraft, in Within Visual Range Combat where Mig-21s small, nimble and manoeuvrable nature coupled with Elta Jamming Pods allowed it to remain hidden for long enough before taking on the enemy with surprise.

Why is India still using Mig-21?

This can be attributed to two reasons: Versatility of Mig-21 and the constant delays and hiccups in the LCA Programme. Every Air Force looks for three things in a Frontline Combat Platform: Cost of the Platform, Nature of the Platform and finally its Operational and Maintenance Costs. Mig-21 has a great advantage in this regard, as it was quite cheap to procure and with local manufacturing, it was an apple of the eye, which is the reason why near about 1000 Mig-21s were inducted into IAF alone.

Couple this with, its outstanding manoeuvrability, upgrade packages available and easy maintenance made it the backbone of Indian Air Force for multiple decades. It can take on various duties like Air Superiority, Close Air Support, Aerial Interdiction, Air Defence and Interception Operations. This is the reason why India’s primary adversaries still continue to use F-7 Fighter Jets, which is a Chinese Licensed Produced Variant of the venerable Mig-21. With the fatigue life regularly tweaked by Indian Air Force, HAL and National Aerospace Laboratory, the ageing of the Mig-21 platform is not a problem anymore, though many aircraft have gone past their stipulated calendar life.

Light Combat Aircraft (LCA) Programme, which would later bore Tejas, was kickstarted in the 1980s to replace the Mig-21 itself but it could not fructify results in a given time period. With the first Technology Demonstrator launching in 1995, till the Tejas got Final Operational Clearance, Indian Air Force wished to retain its Mig-21 fleet, retiring which prematurely without any potential replacement in sight would be disastrous for Indian Air Force who wish to uplift the number of squadrons to a threshold of 42 Squadrons to wage a two-front war. With LCA Programme, fructifying results now, it can be hoped that the Mig-21 can finally be put to rest now by next decade.

Till now in 2021 HAL is only capable of producing 30 unit of Tejas while 22 is operation and rest are in testing, while 10 mk1 and 83 MK1A tejas order. MIGs are now outdated and need to retire, but due to the absence of any aircraft to replace current MIGs fleet IAF is forced to use these MIGs aircraft.

Modi government understand this problem and after seeing the MMRCA programme is going nowhere and the total price what Dassault gave to India of 126 jets with full weapon packages, India specific improvements and maintenance cost is so high that India can’t afford it(around 45 Billion $). Due to depleting Squadrons and an urgent need to fighter jet Narendra Modi let government decided to dump Current MMRCA programme and directly acquire 36 jets in fly-away condition while the MMRCA 2.0 programme is continuing in the background.

The sixth batch of three Rafale fighter jets arrived in India on 5th may 2021. With this, the IAF has received 20 of the 36 jets contracted from France. while another 5 Rafale will join soon.